Back on the Leeds Liverpool

As expected, we didn't do the Ribble Link on Saturday & we were told it would probably be Monday or Tuesday but there was an 20% chance that it could be Sunday. We had already moved up to the moorings at the sports arena & were asked to stay there rather than clog the basin, you have to reverse into the staircase locks so need a bit of wriggle room. We were to expect a phone call at 9am Sunday for an update.
I really didn't think we would be going so Eric, who has been spending a few days with us, was making plans to get the train back to Manchester on Sunday, it's his School Prom this evening which he didn't want to miss (what was wrong with an school disco!)  had to pick up his suit from the tailors (didn't need a suit for a disco!) & wouldn't have got back in time had we done the link today.

With bags packed, buses & train times sorted, just to be sure I sent a quick text to Steve (BW) "assume we are not going today?" A phone call back 5 minutes later " get into the basin, you're off!"  Which pleased Eric as he still got to do the Ribble Link which he had been looking forward to it.

10 minutes later we arrive at the basin which has 6 other narrow boats
& 1 cruiser waiting to go down.

& the Fire Brigade ??
Turns out they were waiting for us to go so they do some exercises 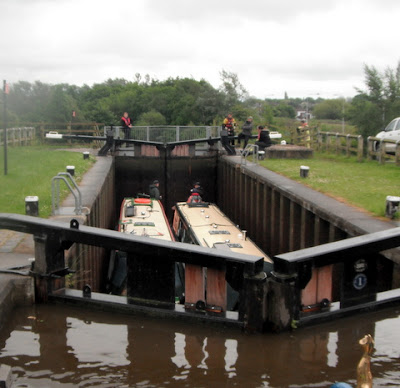 2nd pair goes down, our turn next

1st time we've had a fireman do a lock for us! 5 minutes later they left hurriedly on a shout.

We followed nb Tereen reversing out of the bottom lock,
No photos of the next bit, Savick Brook, which was a bit of a nightmare, the brook had been in flood on Friday & when water levels returned to normal a thick layer of sticky mud was left on the lock landings so we had a job keeping our feet. 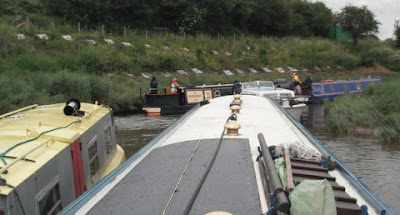 After a brief respite at the holding basin the sea lock is opened & a surge pulls us all forward causing a bit of chaos for a few moments & lots of shouts of "reverse!!" the little cruiser is dragged forward & then spun around by the strong current. Somehow we get sorted out.. 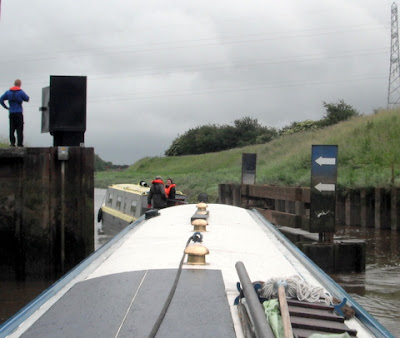 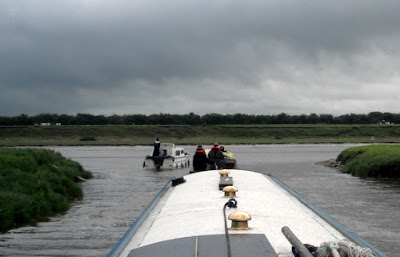 & we head out onto the river 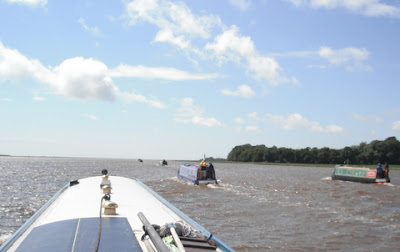 the rain clears & the sun comes out. 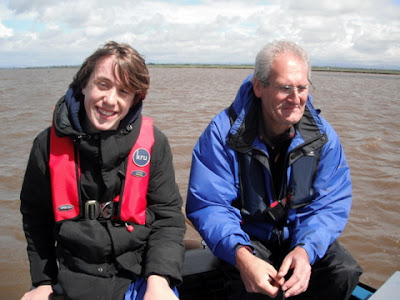 & down the long straight to Tarleton lock, apologies for the quality of the photo, the camera battery had died, this was taken on my phone & has also been cropped. Through the lock & we were moored up on Tarleton visitor Moorings by 4.30pm.

We got the bus into Burscough this morning, did a quick Tesco shop & Eric got the train back to Manchester, hopefully not forgetting to pick up the suit on the way home & as I type should be on his way to the Prom, I hope there will be photos. ;)
Poppy was booked in to Mayors Boatyard this week to have her bottom shot blasted & then a 2 pack epoxy blacking applied but the weather is against us, 3-4 dry days are needed & that's not this week :( so we will just be hanging about waiting, fingers are crossed for coming out of the water on Saturday.
The weather looked good for tomorrow & we had planned to get the second coat of paint on the roof but I've just heard the weather on the radio & it's now forecasting showers by lunchtime.....just for a change.

When we crossed the Ribble Link in April the weather was dreadful, wind & rain, never mind we said, it'll be a better crossing when we go back down in June.  Pah! we are sat here near Lea Town, a couple of miles or so from the link, it's blowing a gale & has not stopped raining all day.
Not sure if the crossing will happen or not, can't see it myself but will have to see what tomorrow brings. We will move up to the basin early am & await orders. 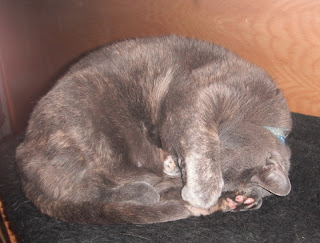 Soona is not impressed