When living in Hull the view of spectacular sunrises & sunsets was usually obscured by buildings so one of the pleasures of living in the marina has been enjoying them with a view only blocked by trees which often adds something to the display.
We have become almost blase about yet another red/pink sky but this mornings 7.30am display over the frozen marina was certainly worthy of a photograph. 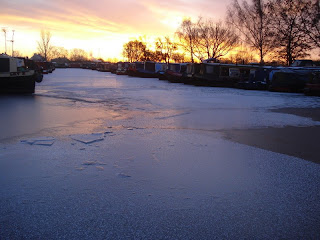 We have started another job on the'to do' list today by making the underbed space more accessable - the base under the bed is made of slats, good for ventilation of the mattress, which I turn weekly & that is fine with no damp but we had spotted some mildew areas in the 'dead' corners underneath.

Access was difficult as the slats were well & truly screwed down so we removed most of the slats & once easier to get at, cleaned & treated mildew areas with bleach solution. The situation wasn't helped by having several bags of sand down there which the builder had used as ballast & the exterior of the bags were wet. They have now been removed & will be replaced by concrete slabs.

We have put the slats back for now but with not quite so many screws! We are comtemplating fastening the slats onto a strip of fabric tape which would be screwed down at strategic points & by removing these screws the slats could be rolled up - sounds complicated I know but this was how our 'old' bed base was constructed in house days & worked just fine. With easier access it should be easier to keep a check for any damp.

I followed Bones's saga of fitting a bed that raised on gas struts with interest & think it's a brilliant idea but think it a tad complicated for our level of skill!
Posted by Julia & Mark at Sunday, February 08, 2009