How to make the best porridge

I have done it again, more than a week since my last post! I wish I could get in the habit of posting at least every couple of days - one of the blogs I follow, Big Martyn seems to manage it & he writes loads! I will try harder......
Last week was half term for Eric so he came to spend it with us, he is shaping up quite well as a cabin boy & has the kettle on & cats fed before I'm fully conscious so as a reward for his hard work we had a trip to The Deep in Hull. 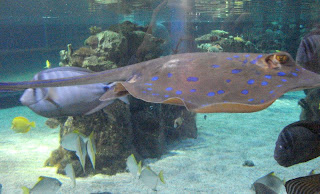 This ray was huge 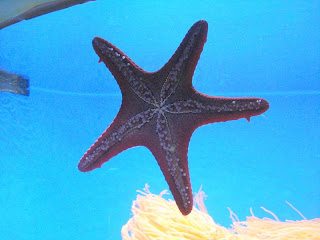 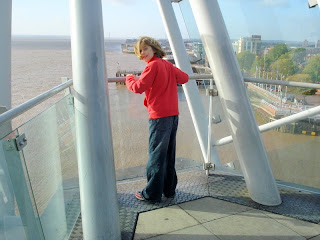 Looking up the Humber from the top of The Deep
We seem to have mastered the art of keeping the fire in overnight (thank goodness as it's been soooo cold!) which means I am able to wake up to hot porridge cooked overnight on the stove in the porringer that Han bought us.
My maternal Grandparents were farmers & my Grandmother had an enamelled ( cream with green edging) porringer that she'd leave on the aga overnight, she just added a swirl of cream & the porridge was delicious. I forgo the cream as I have put enough weight on since moving aboard but it's still yummy. 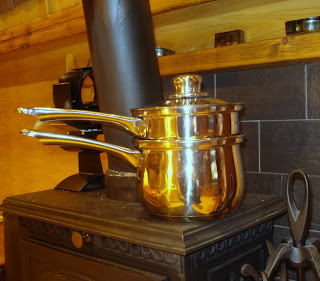 I trekked to Meadowhall yesterday & have finally got something to wear for Rob & Nikki's wedding now just 2 weeks away. It's okay for Mark - he has been measured up & just has to collect his clobber from the hirer's. Watch this space for some pics.

I took advantage of the cold but dry weather this afternoon to dismantle a couple of pallets for firewood. Whilst I was outside I met this border terrier pup - isn't she gorgeous! 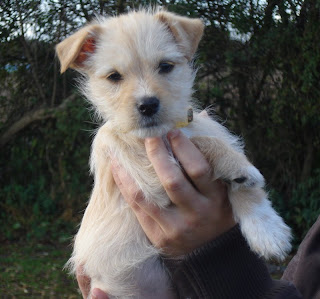 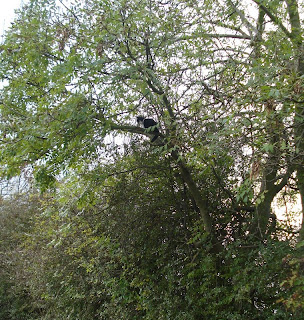 Meanwhile Poppy was trying to scare me by pretending to be a squirrel! whilst Soona did what she does best!
Posted by Julia & Mark at Friday, October 31, 2008 No comments:

A brief lull in hostilities..... I took this at 7.30am yesterday & the promise of a gorgeous day was fulfilled although I didn't have a very successful one as I spent most of it in Doncaster in a fruitless attempt to find something suitable to wear for Rob & Nikki's wedding, which is now less than a month away. I was also looking for some curtain material as I want to replace ours as they have faded badly but again my search was fruitless. Hmmm....

Eric is coming to spend half term with us & we shall probably be going through to Hull for a day to 'do' the museums & The Deep so may try my luck there , if no joy then I may have to trek to Sheffield or Leeds - I'm not good at this looking smart lark - much happier in jeans! ( & don't even mention hats!!)

On the curtain front I am now considering blinds as an alternative- will save me alot of sewing which, within the confines of a narrowboat could be a bit of a faff. Should have thought of this before Hannah loaned me the sewing machine that I gave her when we moved aboard. Sorry Han!

More success on the stove front, managed to keep the fire in overnight, well for one night anyway but hasn't really been necessary as quite mild if a bit nippy 1st thing. Hopefully we have mastered it for when it's really cold. 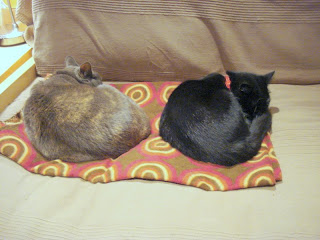 This is a rare pic! Poppy & Soona have never been bosom buddies, the limit of their relationship used to be a mad chase around the house & a bit of play fighting but all that stopped when we moved aboard & Poppy began to spend alot of time outdoors ( catching things - unfortunately)
If Soona goes anywhere near her she is rewarded with a hiss & Poppy won't have anything to do with her.
We have a couple of fleecy blankets for them to sleep on but the one on the sofa is the one they prefer so usually it's on a '1st come 1st served' basis & as soon as one moves off the other will be in there so I was surprised when Poppy joined Soona for a nap yesterday afternoon.
The cease fire didn't last though & Poppy is back to treating Soona with absolute disdain. A nice side effect of all this is that Soona has become much more affectionate with us humans.

Having a lazy day today as still got sore ribs from my tumble last week, a good enough reason to settle down with Rebus for the afternoon.
Posted by Julia & Mark at Saturday, October 18, 2008 No comments:

It's been a busy few days since I last posted, Thursday I sawed up some old pallets ready for chopping into kindling, a by- product of which was the 'noggins' that act as spacers, they burn really well & last for a few hours so long as you don't mind a fishy aroma ( think it must be the glue)

Friday I chopped some of the sawn wood into kindling but my progress was a bit hampered by the bruised ribs I had acquired the previous evening when I took a tumble & landed on the sofa arm (hard wood, not nice soft upholstery!) & I had to eventually admit defeat as just too sore. But the kindling box is full giving us plenty to be going on with.

Whilst on the subject of fires, I had a bit of a flash of inspiration the other day. I have been wondering how I was going to deal with hot ash once I am able to keep the fire in 24/7. I had been considering a Tippy although they seem quite expensive then I looked again at the box I bought for kindling on my last visit to Ikea, 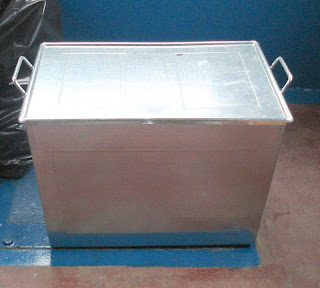 it's a rectangular metal box with a lid & handles, measures about 10" high by 14" wide & cost around £6, ideal I think for hot ash. So the kindling is now in a plastic box & the 'Ikea' box awaits for the morning when I have successfully kept the fire in all night !

Saturday was Hull Fair day. When we lived in Hull the fair was just a few minutes walk away & it became a bit of a family tradition that we met up at ours for tea then went onto the fair. As 2 out of 3 of my children (& grandchildren) live away it was one of the few times when we all got together & the grandchildren love seeing each other.
This year we met up at Rob's ( who does still live in Hull) & were able to meet the newest member of the family, Billy, an English Springer puppy & absolutely gorgeous! 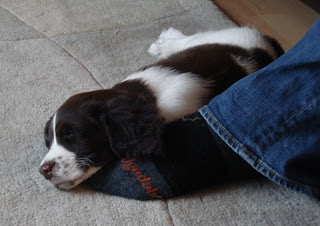 So tiring being the centre of attention! 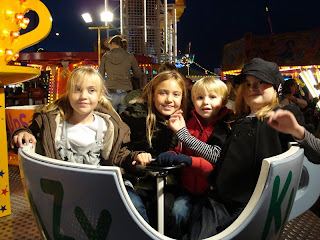 A chance to get a family pic, though the Manchester branch were missing.
Sunday was the boat jumble at Snaith so dragging Phil & Gina (nb New Directions) with us we went in search of bargains. The weather was glorious making it a pleasure whilst we rummaged about - well Phil & I did - Mark & Gina not being much into rummaging. I got a few bits & bobs - some non-slip treads for the back deck, a syphon to reduce the water in the radiator so as to add some antifreeze & a crowbar - always useful!
We also were keen to look at some generators as although we solved the problem of batteries not charging we feel it is a good idea to have some backup. I had seen the 'Kipor' suitcase gennys on Ebay & wanted to see one(& hear one) in the flesh, as it were.
We found a stall selling them & had a demo of the 2600 model - which quite impressed us so we have now ordered one off Ebay ( much cheaper than the one at the boat jumble!) although they are currently out of stock, delivery in 3 weeks - so watch this space.

The Ecofan I had ordered arrived yesterday & is spinning away as I type, hopefully when the cold weather sets in it will help warm all the boat not just the saloon.

Ooops !! I have just inadvertantly given Poppy her 1st ducking! Whilst typing I heard her (3 bells on her collar) coming along the gunwhale so went to open the side hatch to let her in as usual but didn't realise that she was on the otherside so in she went. I shot out with the big net but she managed to climb out onto a tyre & then ran off into the hedge so I've been standing there, towel in hand for the last 10 mins but she refused to come out then just as I was feeling my guiltiest she came out with something small & hairy she'd just caught so I reckon she can't be that bothered! 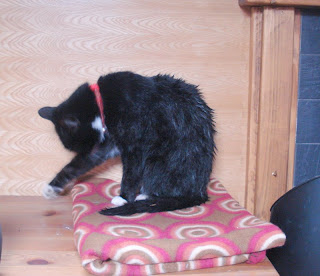 Back in April I made some attempts to keep the stove in overnight with dissapointing results & had not mastered it by the time the milder weather set in so until the last few days I had not really given it any more than a passing thought, but now that autumn has set in it is top of my list of new skills I need to learn.

I have been asking anyone who has a stove if & how they manage it & everyone I ask has a different solution ( or they have given up trying!)
I thought it may be the fuel I have been using, smokeless nuts - yellow bag, cheap at £2 (tho prob gone up for winter) for 10kg & Colin, fellow resident who seems to know the score being a seasoned boater uses 'ovoids' in a blue bag " just bank it up & turn down the damper" does it for him. So I order half a dozen bags @ £3.20 for 10kg then another resident says he uses the smokeless nuts & it works fine for him. Mmmm......

I might add that I have also checked the Canal World Forum which can be really confusing as everyone seems to have a different favourite fuel - but basically the recommended method is much the same -' bank it up & damp it down', which I did last night but out this morning, only just mind as embers still warm.
I shall just keep trying, bothering all & sundry for their suggestions till I have got it sussed.

Still on fire matters, the electric saw we bought has been a godsend - we scavenged a few logs on our recent trip so have been supplementing the coal with logs - I love the smell of wood smoke & even more so when it's free!

We have some new neighbours, Scott & Sharon & they also have 2 cats, not livaboards yet but planning to be eventually.
They have bought nb Cameo that was up for sale after its previous owners decided to become landlubbers again. I was a bit taken aback when first meeting Scott as he knew a bit about us as he reads my blog!
First time I have met anyone who actually reads my ramblings apart from family & friends.

No recent pics to upload ( sorry Albert!) so here is one from our last trip, spotted under motorway bridge.