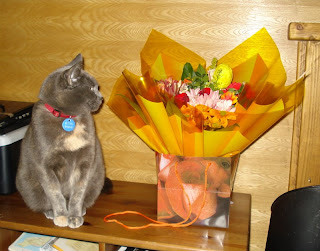 We celebrated by going to the cinema to see The Damned United, very good it was too....
Posted by Julia & Mark at Saturday, March 28, 2009 No comments:

After I had finished updating my blog last Tuesday I made a cup of tea & for no sane reason put it down on the side table next to the laptop instead of the usual spot on my left. So, yes the worst happened & I sent it flying straight onto the laptop which went black & very dead.
I unplugged it & upturned it onto a towel & it was left to hopefully dry out…….

But I really didn‘t hold out any hope & as I have just had a small windfall I treated myself to a new one & considering it was one of the cheaper options in the store I am really pleased with it.
Mark had a fiddle with the old one & at first seemed hopeless but then left it another couple of days, tried again & it came on as if nothing had happened!

The cats have settled back into their routine & seem fine.

Poppy rolling in the sand enjoying the sunshine
Last Autumn I bought an umbrella holder for wet days at the tiller ( cheaper than a pram hood!) & in the blurb was a pic of it also being used to hold a rotary drier & as it is now just about drying washing outside weather I decided to give it a try.

It is fitted with 2 grub screws to tighten onto the tiller arm & 1 grub screw on the upright to hold umbrella/airer in place. I decided to drill a hole in the holder to correspond with the tiller pin to prevent ‘slippage’ as a loaded airer would be quite heavy.

It works a treat & with the spring sunshine we have recently had I have enjoyed seeing the washing blowing in the breeze rather than hung up to dry in the boat.

Another sign of spring, we look forward to seeing the youngsters! 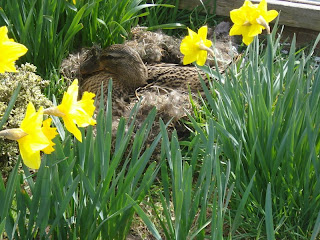 A lovely holiday but....

We’ve been home a week & the tan is already fading, although it has been such a lovely few days here that I probably could have kept it topped up!
When we went to pick up the cats they looked miserable, well fed & healthy but obviously unhappy. They have never been in kennels before as when we lived in Hull Rob ( no 1 son) used to feed them ect. So I don't think we will be doing it again unless we can find someone to look after them in situ, but Scott has volunteered & we could reciprocate with their 2 cats when they move aboard so may be......
Anyway they are settling back into their routine albeit being very clingy especially Soona, as soon as I sit down she is on my knee which has necessitated more sitting down than usual!

Perhaps they'd had an inkling of what we had been up to whilst away, on the 1st day we were sitting out on the terrace of the apartment when a tortoiseshell cat walked from the apt on our right to the apt on our left & it was obvious that she'd just had kittens. She then went back right & reappeared with a kitten & went left.
Mmm.. well it transpired that she had 5 week old kittens in a box on terrace of left side apt & was trying to move them to a sports bag upstairs in apt on right! - So the couple on the left had to be vigilant & kept returning the kittens.
A couple of days later the couple on the right left & asked us if we would look after them - so we had them on our terrace for rest of our stay. 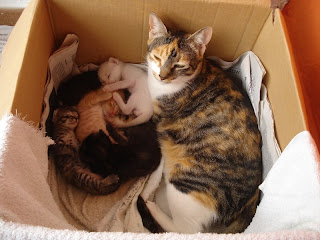 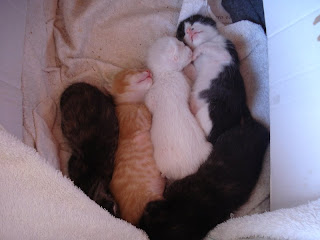 When we left we couldn't find any one to take over as couple on right where just a couple of youngsters & couple on left plainly disliked cats so I had a word with the maids ( not easy as the didn't speak English & my Spanish is basic to say the least! ) It seems that several of them were going to adopt the kittens & we hope they found a safe spot for them all in the meantime.

A few pics of Gran Canaria 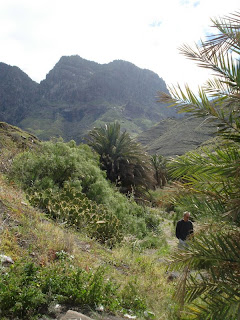 a path in the hills 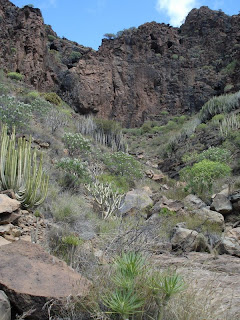 a cat hiding in the lush spring growth 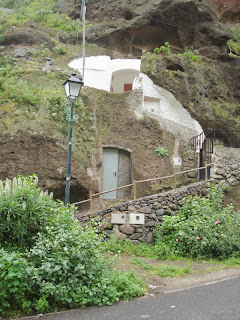 a cave house up in the hills

Back home we found the water level in the bilges had not risen (phew) & on Saturday we managed to pump out the remainder so next job is to rig up a fan to create some airflow to air it out.

Now that spring is on its way we are looking forward to getting out on the canals - no plans ( as they always seem to get scuppered!) when we go we shall just point her north west & see where we end up.
Posted by Julia & Mark at Tuesday, March 17, 2009 No comments: