After Poppy went we decided that, should she not return we would get another cat as company for Soona, probably a kitten but then we took on Charlie instead as she was in need of a home.
All seemed well at 1st but gradually we noticed that Soona, who had been fine with Charlie even letting her share her blanket, was keeping away from her & then Charlie took to attacking her at every opportunity.
Soona was a bag of nerves & wouldn't come out of her bed when Charlie was anywhere near. As soon as she left her bed to go to the cat tray etc Charlie flew at her with fur flying.
After 2 weeks of this something had to be done, unfortunately Charlie does have 'form', when she lived with Han she was 1 of 4 cats & took a dislike to 1 of the group making her life a misery just as she was now doing with Soona which was part of the reason for her being rehomed to us but it was obviously not working out.
After some heartsearching she has now gone to the Second Chance Cat Rescue in North East Lincs ( in Charlie's case it's now 3rd chance!) they will try to find her a home where there are no other cats - A real shame and we are very disappointed it didn't work out.
Then of course there was 'Bob' who was a real character but didn't want to be tied down to 1 'owner' another shame as we would have loved him to join the crew......
So back to the drawing board & our original thoughts about a kitten which is how we took delivery this afternoon of Sid, an 8 week old 'bundle of fun' 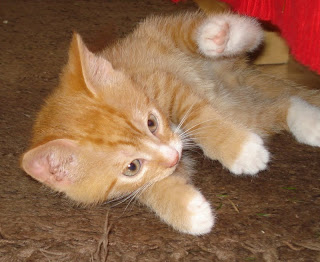 a little playtime before... 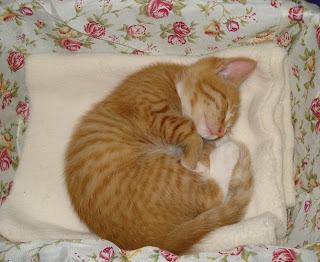 ..... a nice long asleep
Soona's muttering a bit from her bed so I've just told her to be nice.......
On the boating front, we will be leaving our moorings shortly, we are due at Viking Marina, Goole on Friday 7th May for lifting out ready to start blacking on the 10th (Mark's 50th!) then the following week we're off, at last !
I had my wrist x-rayed again last Friday & no fracture to be seen thank goodness but is still painful & just about useless for twisting or turning ( a windlass?) according to Doc could be weeks before it's better, oh well & there was no hope for the loose tooth which had to come out then I managed to get an infection in the socket, still worse things happen at sea so they say!!
Posted by Julia & Mark at Thursday, April 29, 2010 No comments:

So it appears that the 'Bob' situation has been resolved, we had put a collar on him which had a disc with our phone no on so that if, as Mark suspected he was warming himself by someone else's fireside they would maybe let us know & sure enough he was, well not exactly at the fireside but in the garden shed of Rachel, who lives in a cottage just across the road.
She has been feeding him for a few days since he has been sleeping in her shed & having spotted the collar gave me a ring assuming that he was our cat, after giving her the background to Bobs arrival we discussed what best to do, it does seem that he is never really going to settle with us & become a boat cat, much as we would like him to & Rachel doesn't want to adopt him so he has gone to the RSPCA for proper rehoming.
He is a great character & we hope that they find a good home were he can settle & be happy, we will miss him as even in the few days that he has been visiting us he has, as the picture shows, endeared himself somewhat although the food bill will go down as boy he sure can eat!

I only tend to post at the moment when I have something to talk about rather than " did the shopping" or " chopped some wood" anticipating that once we are continuously cruising ( 3 weeks & counting!) I will have lots to blog about, however this week has been a bit different.....
Last Friday as I was returning from the shops I found Grahame ( lockie) waiting for me "quick, jump in the van there is a cat up at Doncaster lock & it might be Poppy!" So off we went, evidently while some work has been done on the railway bridge near the lock a portacabin has been in place for the workmen & a few weeks ago a black & white cat appeared taking up residence in the cabin, during the day at any rate.
A quick look & disappointingly it was not Poppy, twas a huge male twice Poppy's size but a lovely friendly chap. As I went to go a workman asked me if I couldn't take him anyway as their work was nearly done & the cabin was due to be removed shortly which is how I ended up bringing him back here. He seemed very laid back & after a feed settled himself on the font step

We had bit of chuntering from Soona but nothing too dramatic, by this time it was 4pm so I rang the vets & managed to get an appointment for 5.15. The vet checked to see if he had a chip, no & pronounced he was a healthy, neutered male approx 5 to 6 years weighing in at 5.8 kilos, also checked their 'missing' list but only b&w cat on there was Poppy.
So back we came & all seemed fine except I noticed he didn't use the cat tray, hmm... anyway off to bed - all quite till 2am when 'Bob' started wailing loudly. I got up & spent 2 hours ( !! ) with him while he enjoyed my company but he began to make it plain he wanted to be outside so I let him out & he promptly disappeared. We thought that was that, assuming that he was making his way back to his 'home' turf.
That was until 1am Sunday when I heard him meowing to be let in, he ate a bowl of food then it was a repeat of the previous night & eventually he went out.
Then he appeared at 9pm on Sunday evening & this time after devouring a bowl of grub settled himself on my knee till bedtime. To avoid a disturbed night we put a blanket & food in the cratch leaving the side open so he could come & go.
No sign of him all day until 9pm last night when he was back again for more of the same, cuddles & food! Back into the cratch at bedtime & all quiet till 5 am when loud meowing outside stern (bedroom) doors, doesn't miss a trick does he! Mark let him in & Bob just wanted to play, tried to tell him it's a bit too early but this cat doesn't take no for an answer so out he had to go.
So what to do? Where does he go during the day ( Mark cynically says someone elses fireside!) We are here for 3 more weeks & it would be great if he could curb his nocturnal wanderings & adapt more to our routine, shall just have to see, watch this space......
Now to my other bit of news, yesterday I managed to trip over a mooring ring & my chin took the brunt when I hit the concrete, OUCH! mouthful of blood & bits of teeth plus cut under chin & a sore wrist.
Thanks to Grahame I was swiftly taken to A&E, chin glued & steri stripped, wrist in a temp splint as suspected fractured scaphiod bone but doesn't show on xray, have to go back next week for further assessment & I'm off to dentist this afternoon to see what can be done with a loose tooth & 2 missing fillings.
What lousy timing but no point in crying over spilt milk & all that, shall just have to improve my steering skills fairly rapidly so Mark can do the locks & swing bridges for a while.....
Again watch this space! Bye for now.
Posted by Julia & Mark at Wednesday, April 14, 2010 No comments:

A Gathering of The Clan

On the 28th March I officially became a pensioner, it was also Han's birthday on the 26th so to celebrate we all got together last weekend at Hartsop Fold in Cumbria.
I really enjoy our family get togethers & we don't do it nearly often enough. This one was a bit special as it's only a month or so until we set off around the canal system as continuous cruisers.
The kids have bought me a GPS, a Garmin Dakota - Need to get some decent maps loaded onto it as the base map supplied is very basic so I can report to Mark where we are every few mins as we cruise along (only joking !!)
View from our Log Cabin 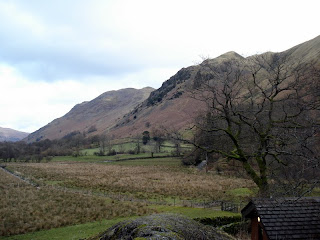 On the Saturday we caught the Steamer 'Lady of the Lake' from Glenridding up to Howton then walked the 7 or so miles back. Quite some distance for the younger members of our party, Rob (aka Ray Mears!) had his GPS with him and after 2 hours walking which had included a picnic lunch & a bit of messing about he announced that we had only done a mile so we had to step up the pace which the young 'uns did remarkably well.
Lunch stop & a photo opportunity for group shot 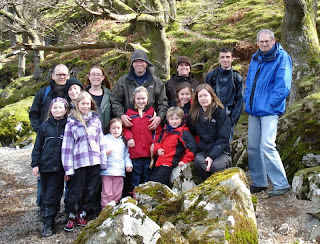 A friendly sole we met on the walk 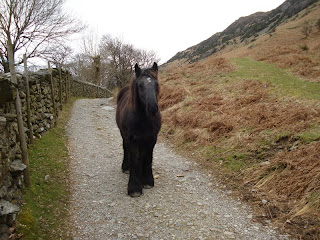 We cleaned off the mud & enjoyed a meal at the local pub (White Lion ?) then back to the cabins for an evening of charades - brilliant! More so because we couldn't all get together at Christmas because of illness.
After lunch in Ambleside on Sunday we set off in our various directions for home but we came to a halt in Windermere when our head gasket blew, our car is an ancient Citroen Saxo which we are getting rid of at end of April as no need of car for our cruising adventures but it seems that it can't wait that long! Anyway thanks to Britannia Breakdown we were soon on our way in a hire car & they returned our car on Tuesday.
Mark is now using the train for the next 4 weeks to commute to work which is no great hardship.
Eric came back to the boat with us for a few days as he had started his easter hols, he is developing an interest in art & did this picture of 'Poppy' complete with Soona in the foreground. 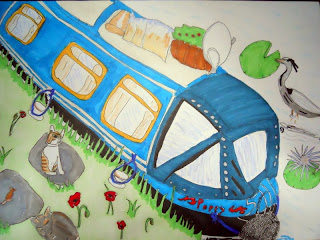 Sadly no news on Poppy & no one has seen her. We just keep hoping - we are due to leave here in 4 weeks & Lockie Graham has our phone number in case she comes back. Thank you to all those who left comments.