I thought I might have had some pretty snow scenes to post given the weather forecast but as it is just wet & windy some more pics of cats!

I sent for the briquette maker from Amazon as the briquettes I bought ( chap was selling them on ebay as he'd made a load but no longer has stove) seemed to burn quite well, they do make a bit of ash so stove needs riddling more often but seems a good use of old newspapers & not alot of effort for some free heat. 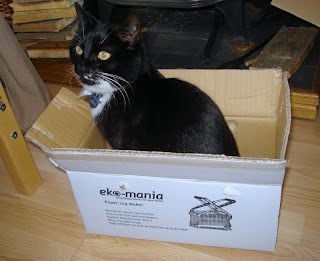 Which Soona wasn't too happy about..... 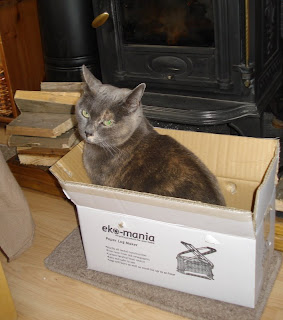 and eventually Poppy let her have it !
Although we haven't had much snow (yet!) we have had some hard frosts, whilst the stove & ecofan keeps us warm & toasty some mornings the hatch has been frozen shut!

Yesterday it was cold but dry & sunny so I spent the morning outside sawing wood in readiness for the predicted bad weather. When I had finished I came in, washed my hands, put the kettle on then put the tools away. We had planned to do the weekly shop in the afternoon as Mark was on early shift & home 1.30ish ( I know at this point you are wondering why I am telling you this - but there is a point - bear with me!)

Mark was home in good time so just a quick shower & we could be off......except the water pump was not working- dead as a doornail. Checked the trip switch & no probs there, so empty the cupboard, fiddle about to get the bottom shelf out to get access to the pump then much chuntering & head scratching. I dig out the pump manual & read the trouble shooting guide whilst Mark ( ever the optimist - not!) is declaring it deceased.

One last look at the trip switch which is on the outside of a small wall cupboard in the bedroom near the stern doors, 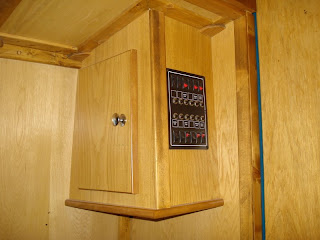 Mark then had a peek in the cupboard, which as well as housing the little axe, pin hammer & assorted bits 'n' bobs is home to the consumer unit & found a loose wire hiding under the axe (where someone had carelessly chucked it!) so the water pump had not died after all, a quick reconnection & all sorted except that the pin hammer & axe have to find a new home! 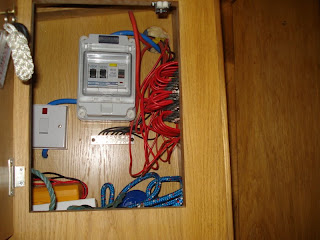 To compensate for waterpump related stress when we'd done shopping we popped into Costa Coffee for a coffee & bun. Very nice it was too.

Some of my neighbours here on the marina are quite arty & they put on an xmas fayre last sunday to display & hopefully sell some of their wares. I bought a couple of watercolours which will find a place on our cabin walls.

The bright spot is not the sun/moon but my flash!

I am interested in rope/knot work so I also bought a hank of cord to start practicing with, should keep me occupied during the winter months - when I'm not making briquettes or sawing firewood.......
Posted by Julia & Mark at Thursday, December 04, 2008