We left Clarence Dock at 8.20am after a peaceful night & what a change from the last few days, grey skies & definitely on the chilly side.
As we approached the 1st lock on L & L we found ourselves 3rd in line with 1 boat already in the lock, so from then on we paired up with Sue & Paul on nb Zambezi & worked through the rest of the locks up to Rodley with the able assistance of the lockies at Forge 3 & Newlay 3. 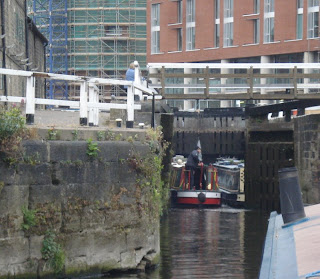 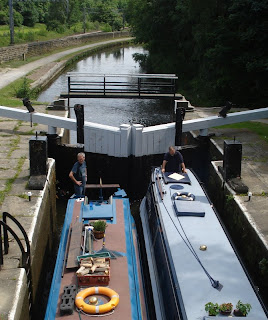 nb's Poppy & Zambezi in Oddy 2
Everything went smoothly with no evidence of the problems rumoured yesterday although the lockies did confirm that water shortage is a concern & they are asking boaters to share locks even if it means waiting awhile for another boat to pair up with.
It was nice to natter whilst doing the locks especially as Sue & Paul are ( I’m sure they won’t mind me saying!) seasoned boaters & I could pick up hints & tips. Always looking for ways to make life easier!
As we worked through the weather warmed up & we arrived at Rodley in warm sunshine mooring beyond the swing bridge which is currently being repaired, upgraded, renewed ? & is in the open position while work continues.

We fancied a pub meal & as last Sept had such a nice meal in the Owl made our way back up to the bridge which of course is open! No worries, turn round & try the Railway - wouldn’t you know - no meals Wednesday evenings mmm….
So instead we enjoyed a jar or two with Sue & Paul (nb Zambezi) & Keith & Audrey (nb Ashlay) who had beaten us to it & already enjoying a pint in the sunshine then back to the boat for a scratch meal & lazy evening.

After another peaceful night, for me anyway, a duck on the roof woke Mark in the early hours, we got away from Rodley at 8.30am. 1st stop was Calder Valley Marine in Apperley Bridge for some loo blue & whilst there we took the opportunity to empty the cassette, dump the rubbish & fill the water tank.
On to Shipley via the Dobson 2 locks, unmanned but one of the ground paddles refused to budge & a BW worker took pity on me & lent a hand - but not just me being feeble he decided there was a problem with it & locked it off.
I then really struggled with the Idle swing bridge which was a pig & took every ounce of push! Next, the Field 3 which are manned (phew!) & whilst locking up a BW work boat appeared with 4 workers, 1 of whom was taking note of repairs needed so I told him about Idle bridge.
Evidently ( acc to the lockie) the maintenance crew walk the canals covering each area every month reporting any issues but how quickly jobs get done ? ……… will it be any easier when we come back next week ;-)

Most of these locks have leaking gates, giving our cratch cover a soaking, Poppy likes to sit in the cratch watching the ‘road’ ahead & got quite a shock the 1st time the waterfall happened & she had to dash under the sofa to recover. 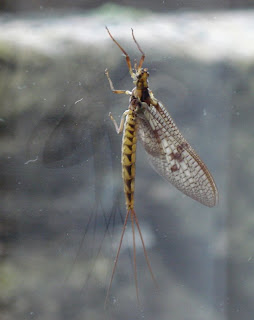 A stowaway
The visitor moorings in Shipley were taken up by Zambezi & Ashlay so we moored on the opp side just as Paul & Sue et al were just returning from shopping, turns out an Aldi 2 mins away so we did a good shop & the cupboards are now full. 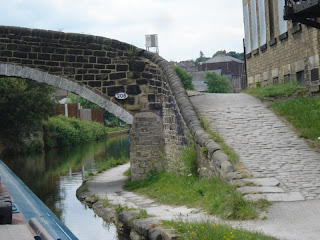 Junction Bridge, Shipley
Stopped off briefly at Saltaire & nipped in to the mill for a coffee & bun then on to find a mooring for the night, we had hoped to stop in the Hirst woods as Poppy hasn’t been off the boat for a couple of days, we don’t let her out in urban areas, but the edges too shallow so we went over the aqueduct & have stopped just short of the Dowley Gap 2, finally mooring up at 5.30pm 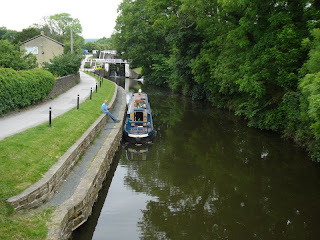 Dowley Gap
We could have gone through the locks & moored near the pub but we are well stocked with beer courtesy of Aldi ! 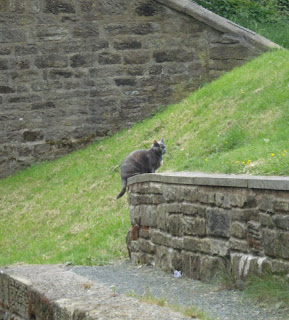 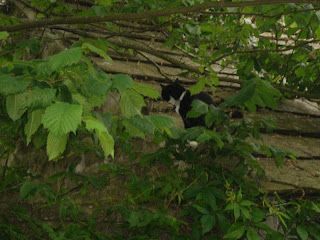 Poppy & Soona have been out for some air, Poppy ventured a bit further than Soona & climbed onto this roof probably with an eye on the birds in the tree! To give them some peace I called her back on board & she’s happily snoozing on our bed……. I don't think it will be long before they are making room for us as it has been a busy but enjoyable day & we're bushed!