I really did mean to blog daily but already we are 3 days into cruise..... so catch up time.

8am Sunday morning saw us leaving Bluewater in glorious sunshine, we stopped briefly at Stainforth to visit the sunday market & again near the top of New Junction for lunch arriving at the (empty) Pollington visitor moorings at 3.30 pm.

We were just getting settled when this family arrived looking for food - someone should tell them that going up to a boat hissing isn't the best way to ensure the goods are delivered, a good job the little ones were so cute! 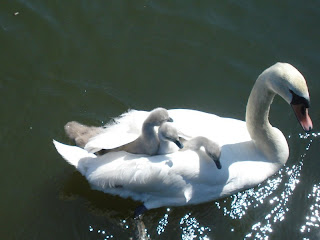 Poppy enjoyed pottering about & even Soona made it as far as the picnic benches! 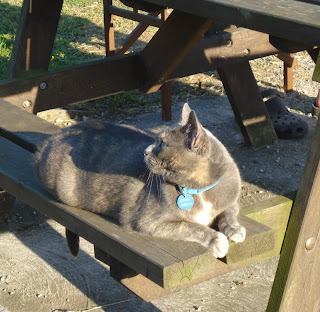 Filled up at the water point before leaving at 8.45am & our luck was in as the lockie was on duty, although it's not hard work as these locks are all electronic push button affairs. Which is all well & good till they break down or won't let you have your key back.... Not so lucky at Whitley & Bulholme as no lockie but the electronics behaved & all well. 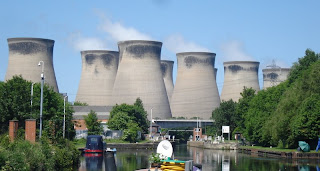 Looming cooling towers at Ferrybridge
After Ferrybridge the Aire & Calder twists & winds to Castleford through a wooded valley, with the hot weather it felt ( I imagine !) a bit like going up the Amazon, I half expected to see a crocodile slithering from the bank. 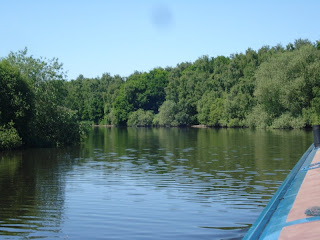 Aire & Calder
Mooring on the visitor moorings in Castleford we walked into the town (5 mins) to get a paper, as we made our way back to the moorings a police car was parked up in the lane. A group of youngsters were swimming in the canal & generally making a bit of a nuisance of themselves. The police tried to point out the dangers of swimming in the canal but I fear it fell on deaf ears!

Leaving Castleford towards the flood lock we had a red light as this monster was coming through. 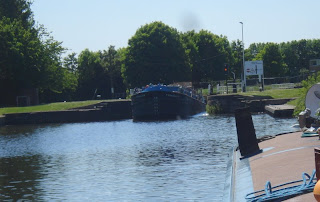 Then more wooded valley cruising through to Lemonroyd were we again found empty visitor moorings, it really is a lovely spot here. Poppy went off to explore & a few minutes I heard a noise & a small boy was chasing & shouting at her, I had a sharp word & the adult with the boy quickly called him back over but Poppy was quite spooked & didn't stray far for the rest of the evening. 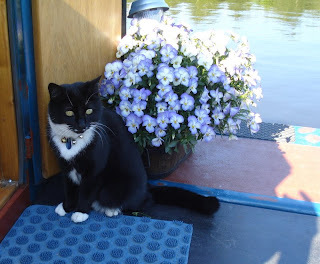 I slept well & was up & about at 7 but Mark not so chipper as he had been awake at 4am & had got up for a drink of water ( I never heard a thing!) & then gone into a deep sleep so at 9.15am not such an early start today.

Approaching Woodlesford lock we were now no 2 in a convoy of 4, the other 3 boats having spent the night in Lemonroyd Marina & we shared locking duties right through to Leeds & now all 4 off us are moored in Clarence Dock.

Whilst passing through Woodlesford a boater coming down told us that it looked likely that the Leeds Liverpool would be closed due to water shortage. Last year our plans for the LL were scuppered because of too much water now not enough, b****r.... 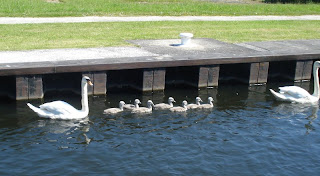 No apologies for more cute pics, this family dashed into Woodlesford lock as the gates opened
..... then at Knostrop lock another boater said " you won't get onto the LL as a lockie had been assaulted by gang so canal closed " mmm... 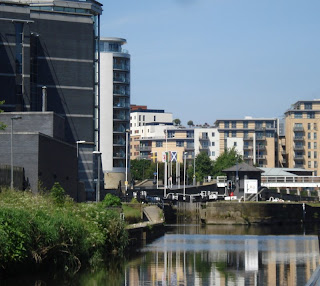 Approaching Leeds Lock
Straight into BW office when we arrived here who said there wasn't a problem as far as they were concerned, the water levels are okay & they had not heard of any assault!! So rumours, gossip, who knows ? Anyway we shall press on up the LL tomorrow regardless & hope for the best.

After the visit to BW office we walked up to The Palace pub for lunch, we ate there last September, it was excellent then & we were not disappointed today, then up to Millets so Mark could buy a hat. He has found that long days at the tiller especially when it's as sunny as the last few days a hat is essential so has been wearing an old rain hat of mine but now has his own, We didn't stay in town long, it was hot & so noisy - after a few days on the peace of the canal it certainly jarred!

I found it uncomfortably hot this afternoon & but it's a bit cooler now, we have even had a few spots of rain though doubt it's enough to dispel rumours of water shortages ;-)
Posted by Julia & Mark at Tuesday, June 02, 2009