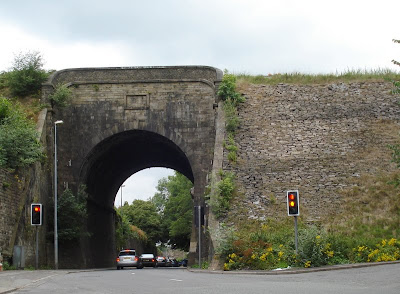 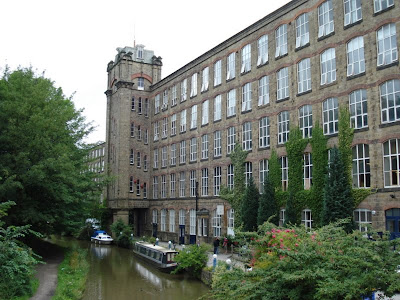 Clarence Mill
We were impressed with  Bollington, it is an attractive, well kept village nestling in the hilly countryside, it's just a shame that the weather was continuing to be unsettled, as we would have liked to do more walking. We did manage to get to the top of Kerridge Hill, my abiding memory will probably be huddled down on the lee side of White Nancy sheltering from the wind & rain!
As we left Bollington heading for Macclesfield we passed nbLazydays, I did wonder as  they disappeared round the bend  if it was fellow bloggers & sure enough it was, Alan & Frances left a comment on my last blog mentioning that they would be in Bollington but of course we were heading south & missed the chance to say hello, another time perhaps, anyway Alan & Frances also enjoyed Bollington & they describe it much better than me plus some lovely pictures so check out Lazy days Blog.
We found a nice spot on the Gurnett Aqueduct, having decided that the moorings in Macclesfield itself were decidedly unattractive. It was a 30 minute walk into Macclesfield so just enough exercise to warrant coffee & buns, which we did a couple of times.
On Sunday I needed some bits from B&Q so I walked into town again, leaving Mark watching the Grand Prix - no buns that trip & on Monday we walked into town for the last time, this time to stock up in Tesco &  a taxi got us back to the canal.
Yesterday we got off at 9am & made full use of the new services at Bosley top lock, by the time we got there at 10.30am lots of boats were on the move.  As we used the services a boat came out of the top lock & a boat came up behind us wanting  to go down so we suggested they take the lock as we were not quite ready which of course meant that when we did follow them the locks were against us, still, we weren't in a hurry & although the day had started wet the sun  was now out.
Before too long we met boats coming up so it was one in, one out, passing in the small pounds 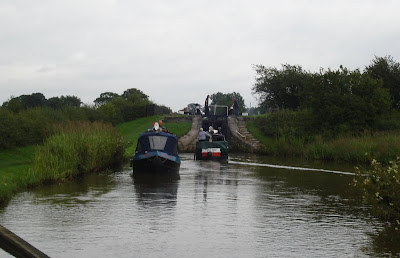 Exiting the bottom lock we found a nice spot on the 48hour moorings just before the Dane Aqueduct, plenty of space here & some great views. The hill overlooking us is 'The Cloud' a fell over 1000ft high ( according to Nicholsons) topped with ancient earth works..... 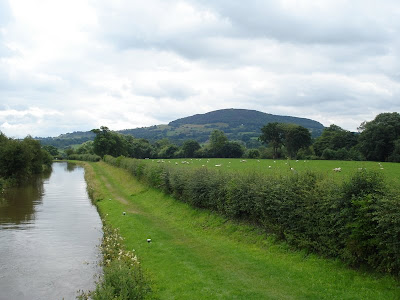 Looking toward 'The Cloud'
Weather permitting we would like to have a walk up there but if today is anything to go by it doesn't bode well! Tomorrow it's a just a short hop to Congleton & another aqueduct for some family time as  Bek & Katie are coming out to join us for the day on Friday.
Posted by Julia & Mark at Wednesday, August 04, 2010