Our mooring on  the Oozells Street Loop was only for 48hours so we had moved up to the 14 day moorings in Cambrian Wharf at the top of the Farmers Bridge Locks. It was a pleasant enough spot the services are nearby & it's handy for town. We had a couple of nights of loud music from the Flapper & Firkin opposite but it stopped at 11ish so didn't disturb us unduly.


But 7 days in Birmingham was long enough, so yesterday, with a dry day forecast  (why move in the rain if you don't have to ;) )  was cruising day. I haven't really resolved the situation with my wrist but did have an x ray which showed no fracture or arthritis ( which is good!) so maybe it's just one of those annoying things that will take it's time to heal. 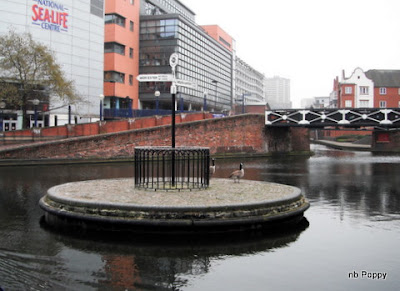 We might have gone the wrong way round the roundabout..... 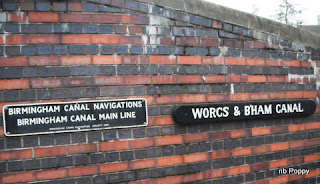 Passing through the 'Worcester Bar', originally there was a barrier here between the Worcs & Birmingham Canal & the Birmingham Canal, there was no junction & for several years goods had to be transhipped from one canal to the other.
Common sense finally prevailed & a stoplock was inserted to connect the two canals. 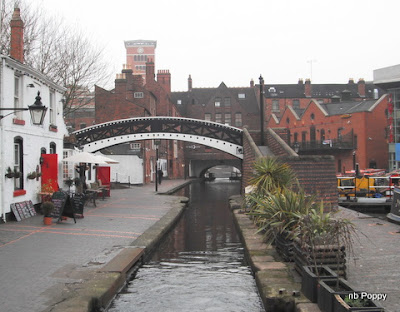 Looking back towards the basin,
the Canalside Cafe is just on the left where we had a very nice lunch one day. 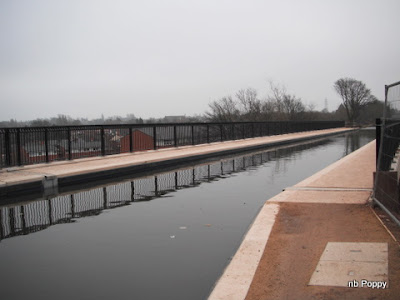 The very new Selly Oak Aqueduct  over a major new road development, it looks quite smart. 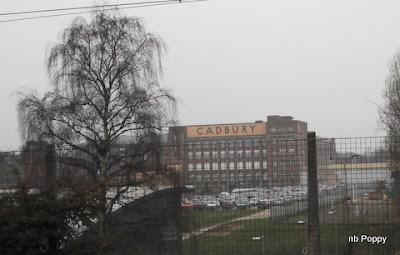 Passing Cadbury World  in Bournville, the nearby railway station is painted in Cadbury purple, Mark commented that maybe it should be yellow as Cadbury is now owned by Kraft.... 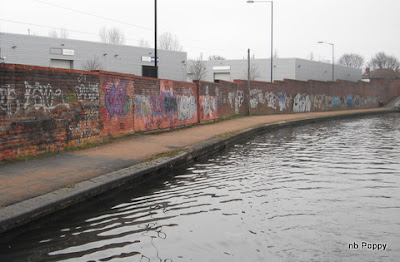 We were looking forward to seeing the back of this..... 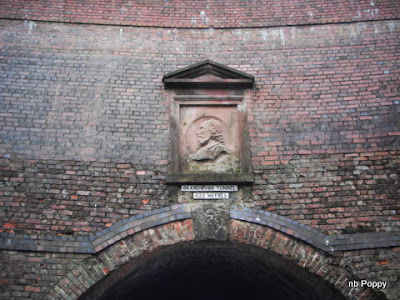 Now on the Stratford -on-Avon canal.
The imposing entrance to Brandwood Tunnel, the plaque is William  Shakespeare. 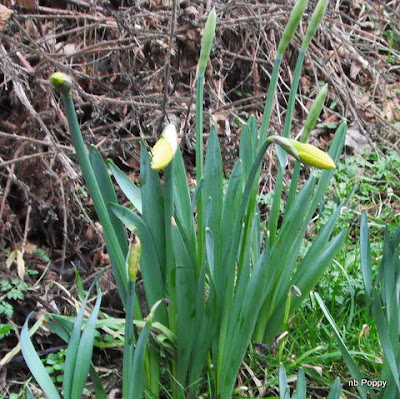 A welcome sign of spring on a grey, bitterly cold day
Emerging from a long cutting we were looking for a spot to moor for the weekend that had a sight line to the satellite for the television . Tonight it's the excellent 'The Killing' & Sunday sees the start of the new series of 'South Riding'.
Finding a likely spot just outside Dickens Heath  we moored up at 2.30pm, very cold & glad to get warmed up by the fire. The TV signal is fine so we're sorted for a few days, Mark went off in the rain this morning, he had spotted a Tesco Express on Google Earth ( very handy tool for us travellers) & returned with the weekend Guardian. :) 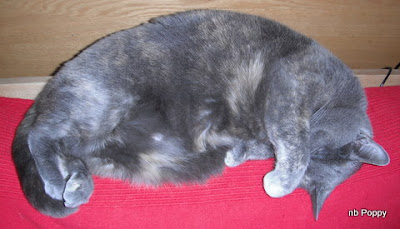 Meanwhile Soona did what she does best...
Posted by Julia & Mark at Saturday, February 19, 2011