The long dry spell of weather broke this morning at 1am when I was woken by heavy rain so the walk to the co-op in Long Itchington, our current mooring, to get the paper was a damp one but as I type the sun is coming out again.
We moved up here on Thursday but first, back to Wednesday..... 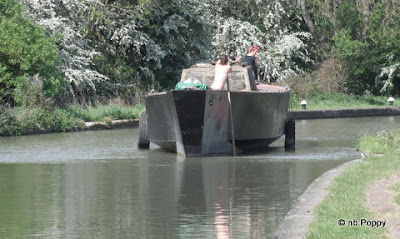 These 2 were poling this craft along as they don’t yet have an engine, it looked like hard work but they seemed quite happy as they punted along in the sunshine 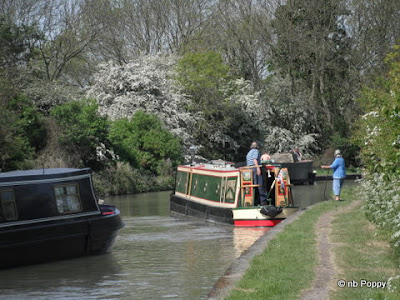 These boaters had to be patient while the unmotorised craft was (very!) slowly negotiated
to the lock landing & then through the lock.
We got off at 7am on Thursday, the water level was well down by at least a foot
but we stayed centre channel & out of trouble. 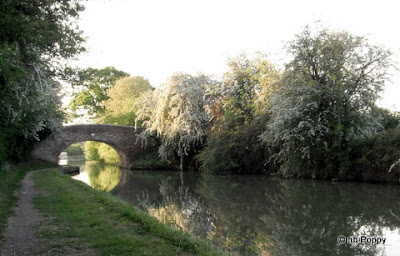 I can't remember which bridge this was but worthy of a photo.
All was okay until we got to the pound below the Bascote staircase locks which was very low. 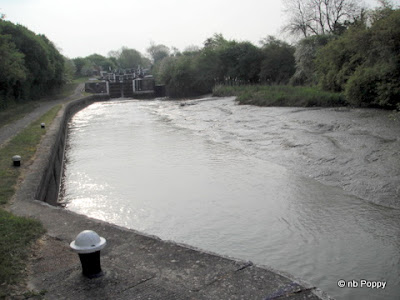 Mark went up to let some water down & I rang BW to inform them of the situation as Mark had spotted it was also empty on Wednesday morning when he was out on his run. We soon had enough water let down to enable us to get up the locks & before long moored just past the disused railway bridge. 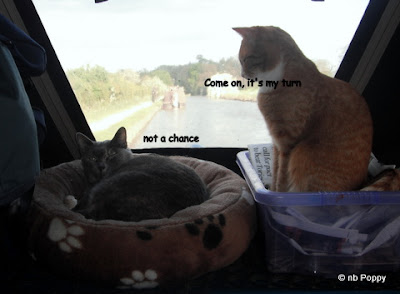 The ‘doughnut’ was originally Soona’s & she loved it but then Sid claimed it & avoiding any confrontation, Soona left him to it - until recently, she has rediscovered it & doesn’t give it up so easily. Maybe we need to get another for Sid but I think he will still want whatever it is that she has got!


Depending on the weather ( we don’t cruise in the rain unless we really have to!) we will do the Stockton Locks on Monday. We have a few litres of waste oil to get rid of & Andy has told us about a household recycling site just a few minutes walk from bridge 21 so hopefully we will be able to get rid. Waste oil disposal points are few & far between & as we use 5 litres a service every couple of months or so it accumulates & as ever storage space is an issue.