It was Tuesday when we finally left Long Itchington, leaving at 6am (Sid has got into the habit of waking us early !) we worked our way up the Stockton locks, just one hiccup in an otherwise pleasant morning, the 1st lock was in our favour & Poppy was sat in the lock waiting for it to fill. I had checked the 2nd lock which was also empty then a couple of minutes later realised that someone was at the top paddles on the 2nd lock filling it up!
Not feeling up for confrontation I just sat on the beam & waited for him to exit the lock, he opened the bottom gate &  I walked up to be greeted with "it's not much fun being a single hander" !
I couldn't help but say "well if you hadn't snatched our lock I would have been happy to have given you a hand"
Mark also had a 'word' as they passed each other so I think the point was made.


We moored up opposite the Boat Inn & stayed for a couple of days, It was pleasant enough but a bit noisy as we were right next to a rookery & they don't half make a racket!
Tuesday was also Mark's birthday so we decided to eat out & had a walk back to the Blue Lias Inn for tea, seems daft when we were moored outside the Boat Inn but  we just didn't fancy it for some reason. Anyway the Blue Lias was nice, food good & the puddings to die for!


I had broken the charger on my net book, ( which is one reason for the lack of posts) a new one was duly ordered from Amazon & we walked back down to Long Itchington Post Office on Thursday to pick it up after a phone call to the very helpful Lesley told us it had arrived.  Once back on board we decided we'd had enough of the rooks & moved a couple of miles up to the top of Calcutt locks.


Another nice spot, no trees or roads so Sid was off the leash which he really enjoyed, there was a 5' or so hedge & he spent most of his time in the hedge practicing his climbing skills.
On Friday Mark took the chimney off & I gave the stove a good clean, thinking it would be the last time I'd clean this fire as we are planning to have a new stove with a back boiler that will run 2 or 3 radiators before next winter. So of course Saturday was cold & we had to pop the chimney back on to have a fire!! I also managed to break a tooth  :( so I will have to try & find a dentist in Banbury.


Yesterday we left at  8.30am, a late start for us but we wanted diesel from Calcutt Wharf & no point in setting off early as they open at 9am although we got there just before 9am & it was already busy.  A few hire boats coming back in, their holiday over. I always feel a bit smug & very lucky at this point as we are on one long holiday.
Filled up with diesel, a gas refill & some loo blue - £200 ! Beans on toast for the next
month...... 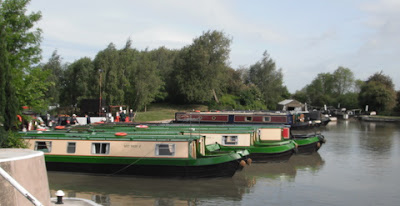 A busy Sunday at Calcutt Wharf 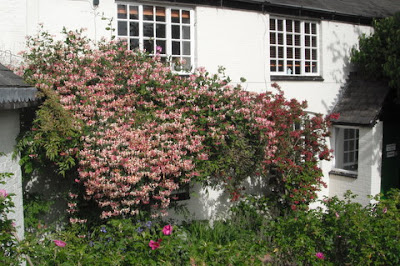 Glorious honeysuckle in bloom at Calcutt Wharf
We got moored up a few hundred yards past Brickyard Bridge at Napton  just as the rain started. The view from the window is of a field with large assortment of ponies all shapes & sizes, some brown, horned sheep & lambs, a deer & some cows, all  seeming to co-exist quite happily.
I would at this point have put up a photo or two of cute Shetland ponies or lambs with horns but my camera battery went flat whilst out walking this morning & now it's charged up they are all out of sight on the other side of the field....
The mornings walk was to the village shop  via the Hill, which is a bit of a climb but worth it for the views. 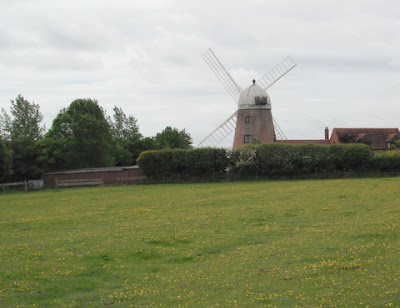 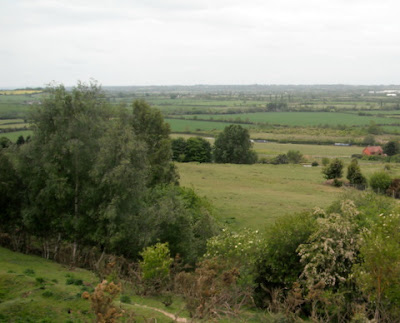 Looking back down the hill, Poppy is just visible to the left of the house.
Now we are on the south Oxford  there seems to be a lot more boat traffic, there was a bit of a queue as we passed Napton bottom lock on our walk this morning & as our plan is to go up the locks tomorrow Mark will no doubt be wanting an early start to avoid hanging about, as if we have any need to rush...
We are heading for Fenny Compton unless we are tempted by anywhere on route.
Posted by Julia & Mark at Monday, May 16, 2011