Yesterday was chores day so while I did the laundry, Mark went up to Argos on Edgeware Road to pick up another vacuum cleaner as the one I bought in Staines was rubbish so it's been exchanged. He put it through it's paces & it seems to be up to the job.
Chores finished we went off to Maplins, reason being there is no satellite signal here surrounded as we are by tall buildings & I had read on Petroc's blog  that they had bought a mini aerial for £9.99 which they were getting a picture with when no sat signal. At that price it seemed worth a try though we ended up spending £14.99 for one with a slightly better range, also had to buy a freeview box @ £17.99 Came home, plugged in & we have TV, a really good picture from this titchy thing, not all channels but Mark can watch Tour de France so he's happy. 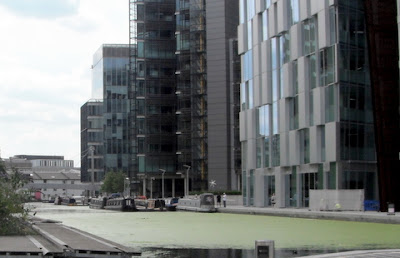 A very weedy Paddington Basin, we are in there somewhere, 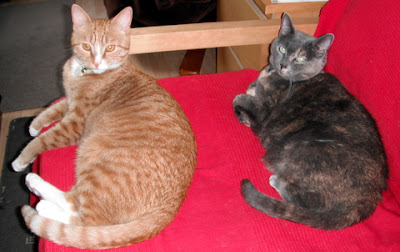 A rare photo, it's not often these two are sat so close, Sid usually ends up 'play fighting'
& Soona runs off, squealing...She's a big wuss. 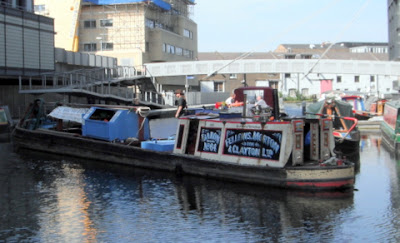 We were just having a coffee this morning before setting off into town when nb Baron (Pete Wakeham) fuel boat came down into the basin, at 80ppl domestic he was doing a brisk trade & we took the opportunity to fill our tank. Now we just need another leisure battery & some oil filters, I rang Uxbridge Boat Centre as we will be going past on our way back up north & they have both in stock, sorted.
Had a walk up to Oxford Street as I wanted some crochet hooks & other bits & bobs, having  found Kleins on google I thought they would have some. Rather disappointed, the staff were off hand, only 1( & the wrong!) size of crochet hook & I felt we'd had a long walk for nothing but they did grudgingly suggest Liberty's. They were just round the corner in Regent Street & what a difference, had just what I wanted & very pleasant to boot so should you need any haberdashery items in London I can recommend Liberty's. 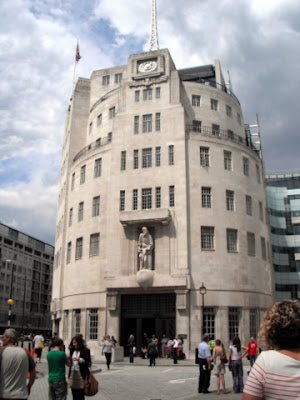 Broadcasting House, although not much broadcasting today as they are on strike 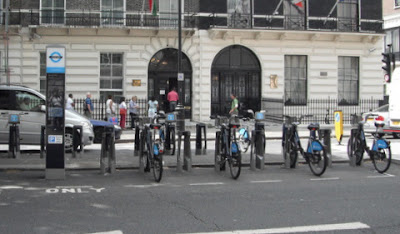 one of Boris's 'rent a cycle' stands 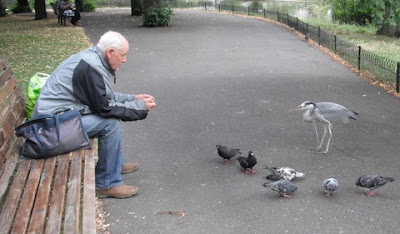 We walked back through Regents Park, where even the Herons are tame 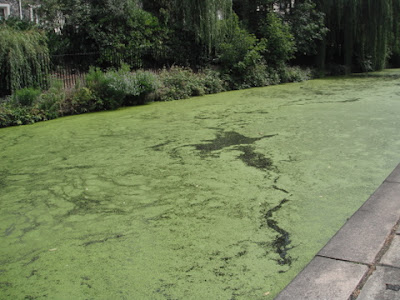 Walking back to Paddington Basin along the Regents Canal, the weed is really bad here.
It was nice to get back to the basin after the madness of the city.
Posted by Julia & Mark at Friday, July 15, 2011