What with battery problems & the dreadful weed we decided to not go any further east, so once the wind & rain had eased on Tuesday  we headed back up towards Bulls Bridge. We had been a battery down since we had to call RCR out back on the Thames at Bray. Having tried & failed to get one anywhere ( well a reasonably priced one!) I eventually located one at Uxbridge Boat Centre & they also had the oil filter we needed.

We passed this houseboat which is for sale it can be yours for £119,000 -
they have got the same solar panels as us ( though a lot more!) which I can recommend
Still weedy note, though not as bad as Paddington & the Regent Canal. 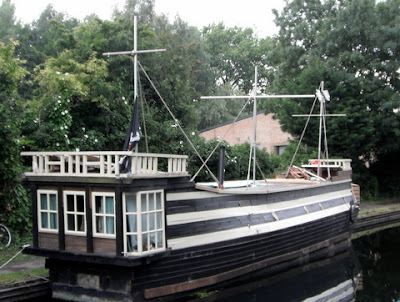 something else a bit different...

A couple of miles before Bulls Bridge we stopped at a mooring  we'd spotted it one the way down, it's just beyond the newish BW marina at Engineers Wharf & it's a nice patch of countryside amongst the urban sprawl. It was so peaceful we stayed 2 nights & there is a Tesco at Hayes just a 15 min walk for supplies, also brambles aplenty so we had our 1st this year, just lightly stewed with yogurt this time, next time we'll have crumble. :)

On the move again on Thursday & the first stop was the canal side Tesco at Bulls Bridge junction & then we turned north west back on the main line, the next stop was Uxbridge Boat Centre.  A very busy boatyard with boats everywhere it was difficult to see where we could get in & Mark ended up half breasted up to an old working boat & I managed to clamber across to terra firma. It was worth it, got the battery & the filter & I resisted the temptation to browse what looked like a fairly extensive chandlery.
A bit more cruising & we moored up between Denham Lock & bridge 182, just before the rain started. The new battery was soon fitted so we are back up to 440amps again which suits our power usage.
We stayed put for the weekend as it was fairly quiet ( apart from the buzzing from overhead pylons & the nearby A40) & just a mile or so to walk back into Uxbridge for the papers & other essentials.
I had a repeat prescription to collect from Harefield post office having previously rung them to check it was okay so yesterday we cruised the couple of miles to South Harefield & moored up above Wide Water lock. I had half a plan to stay around Harefield whilst my prescription was filled ( chemists rarely have my migraine tablets in stock &  it usually means at least waiting till next day) but we weren't impressed with the moorings available so as it was lovely weather cruising we carried on. 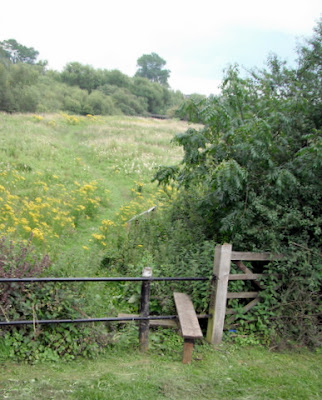 I liked this view, the path looks very tempting especially after a week in the City! 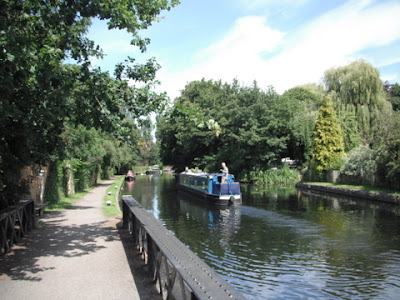 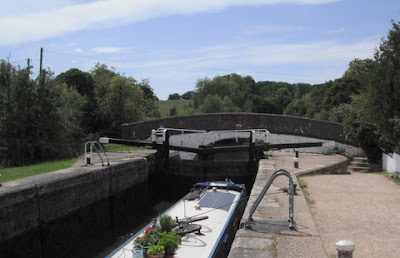 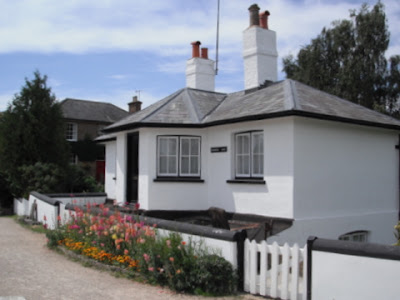 & it's delightful cottage
We found a space on the moorings above Stockers lock that Mark reckoned would be okay for a TV signal & be handy for Rickmansworth. Through a gap in the hedge we could see what looked like a park, a look at the map told us we were moored alongside the Rickmansworth Aquadrome so after lunch we had a very pleasant walk through it to town. The prescription was left with Boots & as usual needed to wait till today to collect it.
This morning Mark did the service now we have the filter, we need to stock up on them really than faffing about looking for them when a service is due, last autumn when RCR did our service they sold us 6 & they were much cheaper than at chandlers.
I walked back into town this afternoon & collected my meds so that's sorted for another month. It's not been as sunny today but still warm & Sid has been happy on his lead lying in the hedge bottom or charming the passersby. Tomorrow we shall move the half mile or so up to Tesco to do a food shop, hope to get on to the service point, which is, according  to mark after he walked up there today, on the same spot as the small lock landing. After that we shall probably potter along until we find a nice quiet scenic spot for a few days, not too much to ask I hope!
Posted by Julia & Mark at Tuesday, July 26, 2011