On Monday we cruised the 3 miles or so to Milton Keynes & found space on the Campbell Park moorings. It's a very pleasant half hour stroll through the park to central Milton Keynes where there are  more shops than you can shake a stick at although all I wanted was Boots to collect my prescription. 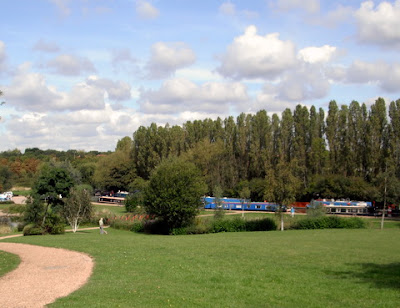 Campbell Park moorings, we are in there somewhere 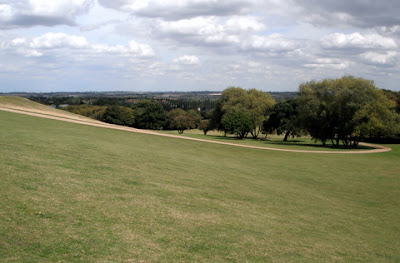 A view of Campbell Park


The towpath was a fair step down from the boat meaning the gunwales were high out of the water so one side got a coat of blacking to cover some of the scrapes we've accumulated, the other side will get done eventually...


Tuesday was wet & chilly so I spent most of the day painting indoors, I think I have mentioned that after the success of the ceiling being painted the rest of the boat would be done, the bathroom has been already been done & now it's the kitchens turn.

Wednesday was a better day weather wise & as I needed some more paint we had a walk to Homebase which is the other side of the shopping centre. One thing we had noticed about Milton keynes was the number of loose & sticking up paving slabs & as I'm accident prone at the best of times I was being extra careful but I still managed to take a tumble as we crossed in front of Toys'R'Us, fortunately there was no one around to see it &  apart from a sore ring finger I was in one piece. We got the paint & walked back to the shopping centre as I had promised Mark coffee & a bun in return for carrying 2 tins of paint, by now my finger was swelling up with my rings getting tight, not fancying having to spend the afternoon in A&E if my finger turned blue I went into a jewellers to see if they could cut them off for me, which they very kindly did.
My rings will be repaired when we are next spending some time handy for a town with a jewellers, probably Rugby. The finger has been colourful & sore but much better now.


Thursday started wet but turned into a fine afternoon so we decided to make the best of the sunshine & move on as the forecast didn't look to good for Friday & we needed to fill the water tank.  As lots of boats were on the move we expected to find a queue at Gifford Park service point but we struck lucky as it was empty


any readers who are fellow boaters might want to skip the next bit....

In case you wonder what us boaters do about getting water & getting rid of rubbish etc well, we use one on these... 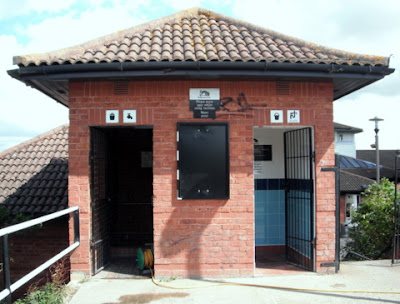 Water & rubbish bins one side, a place to empty the loo cassettes (or do a pump out) on the other. These services are reasonably clean & pleasant to use, they are not all like this!
The tap was really slow & it took 50 minutes to fill the tank, a good job no one else was waiting.


Not having anywhere in mind to stop we just pottered along but it wasn't long before we found a likely looking spot  about a mile or so past Great Linford. Nice open views, a sat signal for the TV & no trains or roads too close, perfect for the bank holiday weekend. 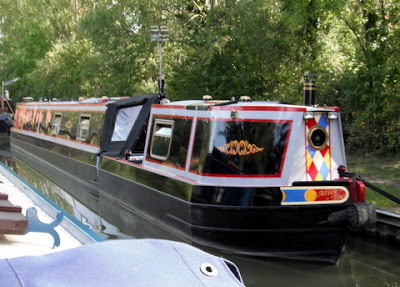 We passed this interesting boat 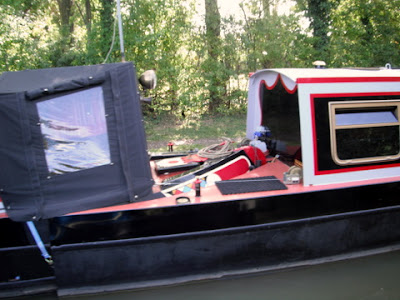 It is really 2 boats, the front 'bit' comes off - some locks are only 58' long (thereabouts) which is why we have a 57' boat. These boats, Alice & Alice Too mean Alice Too can be removed for shorter locks, Alice Too then goes through the lock side by side with Alice. Clever... 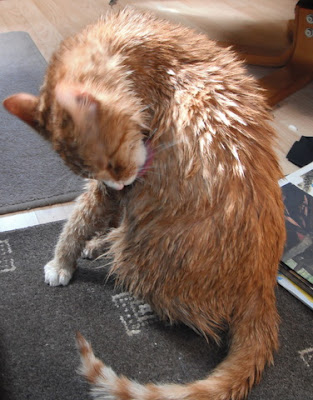 Well, it had to happen sometime....
Sid fell in yesterday afternoon, Mark was tidying up the roof & I was painting in the kitchen when there was a lot of splashing & crying which I thought was a child till I heard Mark shout. Sid has had his freedom here as it's quite safe (apart from the canal!) & he'd been off exploring all morning then in the afternoon decided to explore the roof & gunwales, found out the hard way that it's not a good idea to turn round on the gunwale.
We had a long rope fender on the stern just for this eventuality & he managed to clamber up, still howling! Anyway no harm done & hopefully a lesson learned.