Traffic jam on the Atherstone flight

We had our stroll up to Aldi yesterday & I'm glad we did as I got myself a pair of these thermal trousers, they will come in useful when winter cruising. :-) 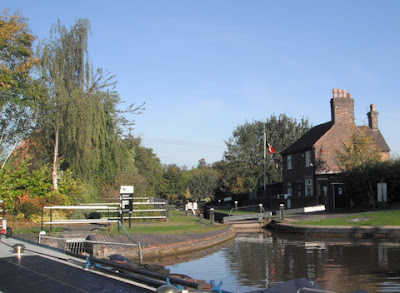 This morning the sun shone as we moved on to the water point at 8.30am, there was not a lot of point in being any earlier as the top lock is chained up until 8.30am & locked again at 4pm, as a water saving measure. As we filled the water tank 2 boats, nbs Compton & Uncle Mort went down & we followed at 9.30am
The top lock was the only one we had to fill as we met a steady stream of boats coming up & it was all going well until we got to lock 6 where we came across nb Uncle Mort in the lock.
The pound between 6 & 7 had been emptied overnight as both sets of paddles had been left open on lock 7 ( which takes a fair amount of stupidity!) The water level was still down & Uncle Mort, being deep draughted, had been unable to exit the lock so they were refilling the lock.They reversed out & we went in, fortunately  we are shallow drafted & we managed to exit okay. 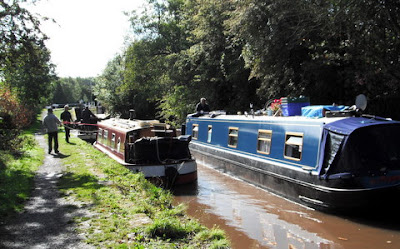 The queue was growing waiting to go up... 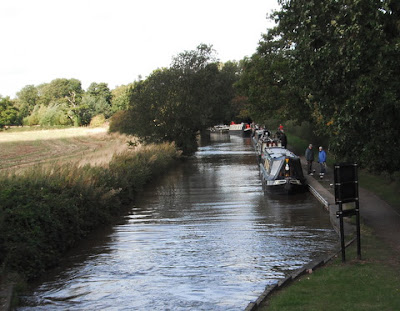 ...with an even longer queue at the bottom lock.
I was surprised at the number of boats coming up, it felt like a bank holiday!
As we had been lucky with most of the locks in our favour it had only taken us 2 hours to do the 11 locks, the boats going up would be taking a fair bit longer.
We noticed the wind was getting up & Mark had a job on to keep us from being blown into the bank so when we came through bridge 50 & spotted a likely looking mooring on some pilings we pulled in. It's about a mile & a half into Polesworth so we shall stay here for tomorrow. I need to get some washing done & Mark will walk into the village for any supplies.
Just as I was typing a few minutes ago nb Uncle Mort has gone past so the water level must have improved. It is really windy now & Poppy is creaking & rocking, but we have a TV signal, a good internet signal & may light a fire later so it can blow all it wants :-)
Posted by Julia & Mark at Wednesday, September 21, 2011