Last Thursday dawned sunny & the wind had dropped, good walking weather so we followed the route of the canal as far as we could before we had to divert onto a footpath which took us through Measham Lodge farmyard where we exchanged words with the fairly unpleasant farmer. He obviously doesn’t want riffraff on his property but seems to have failed to grasp that if the path has good signage walkers will stick to the path & not wander around looking for it! Apart from that incident we enjoyed the walk, stopping briefly in Measham ... 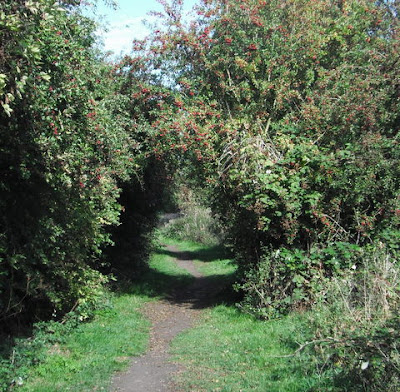 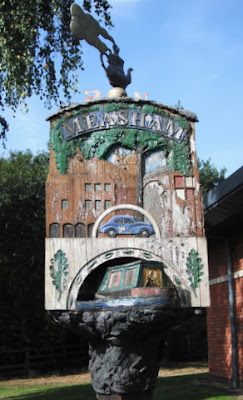 & then continued up the disused railway line to Moira where the canal terminates, we had hoped to find a pub for lunch but nowhere really appealed so following the restored  bit of canal we walked back along the towpath 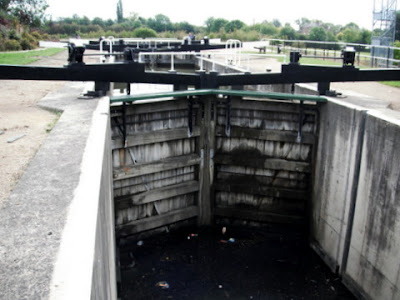 The new locks at Moira, no leaky gates here 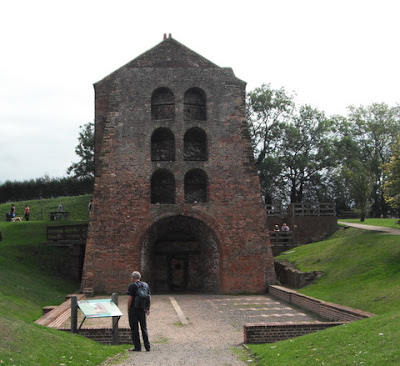 Moira furnace
The  Moira Furnace is adjacent to the canal & we took advantage of the café for a snack before following the watered bit of canal to Donisthorpe then back on footpaths back through Measham, past the lodge (not spotted this time !) & back to Snarestone with tired feet, 11+ miles.
Later that afternoon I popped across to the Ashby Canal Ass’n hut, they sell bits & bobs including a special offer on loo blue (5lt for £7, a bargain !) I had a chat with the chap looking after the hut about how the restoration was progressing, quite well it seems, work was due to recommence on Monday & they hope to reach Measham in 3 years. I told him about our walk & the ‘exchange’ with the farmer, evidently some land has been compulsorily purchased for the restoration & said farmer wasn’t happy about it. Shame…..
Friday dawned grey & cold but it was time to leave as we’d had our 48 hours. At 7am we were on the water point & by 12 noon moored up back in Stoke Golding. 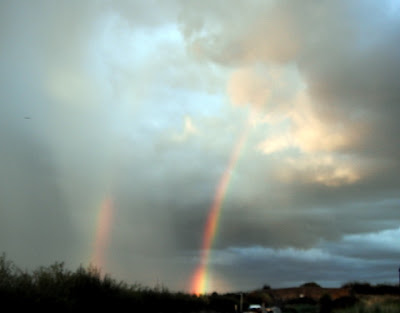 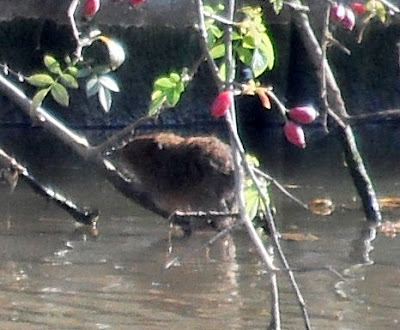 A not very clear pic of a water vole
Saturday & Sunday we travelled both days & it wasn’t very memorable as my diary entry for both days is sparse! On Sunday we had moored just south of Hartshill  so it was a short cruise into Atherstone yesterday. I was hoping a prescription would be waiting at the post office which it was,  it was dropped off at the chemist. Atherstone has a useful, busy little high street with a co-op, banks, bakers, hardware shops etc.
We were going to collect my prescription this morning & then move on, tackling to Atherstone flight of 11 locks but we awoke to rain & the weather forecast had changed from a shower at 7am to showers all day so as we don’t have to move we aren’t :-)
On collecting my meds we found it was market day, I wished it’d spotted it before I bought expensive veg at the co-op! According to Narrowboat Skyy there is also an Aldi which we hadn’t spotted, have now located it  so may have a potter up there this afternoon.
Tomorrow a reasonable weather forecast  so it’s down the Atherstone flight & on towards Tamworth.
Posted by Julia & Mark at Tuesday, September 20, 2011