Friday morning was sunny & warm as we left Tixall Wide & went up to the junction, the water point was busy with 2 boats filling up & one waiting so Mark reversed back onto an empty spot on the right of the junction & then nipped up to the village for a paper whilst we waited. It looked impossible to get on the diesel point at  Anglo Welsh so we didn't even try but it seems it would have been possible as Geoff (nb Seyella) pointed out in a comment, evidently they can serve diesel if you're moored on the service wharf, presumably they have a long hose.....


As we came through a bridge ( can't remember which one!) we spotted this horse on the towpath with butty Verbena alongside. 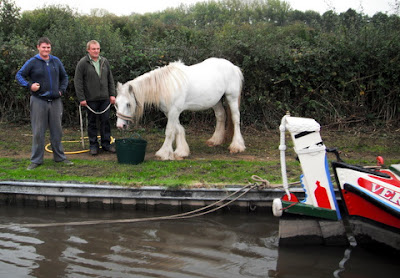 Turns out that there was to be a gathering of working & historic boats at Limekiln Wharf in Stone over the weekend & Danny the horse was going to tow Verbena to it.
We carried on for a while before  mooring up in Weston for lunch, as we were getting ready to move off Danny , Verbena & crew were coming up behind us so we passed the rope over Poppy & let them take the lead. 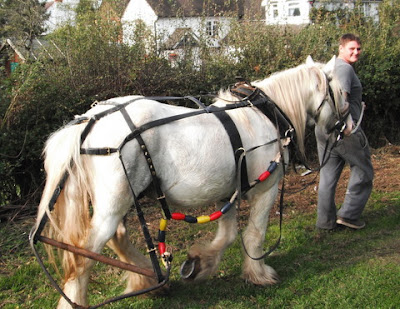 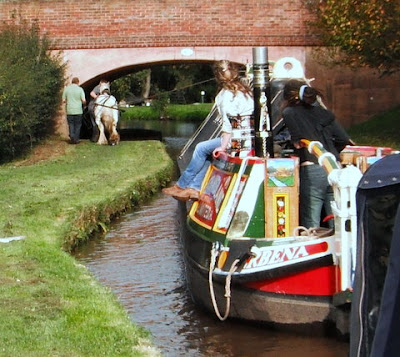 Danny looking like an old hand when in fact it was his first time pulling a boat. 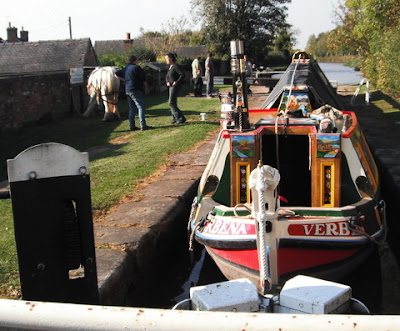 Verbena in the lock 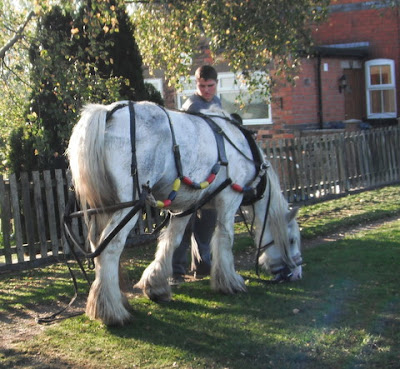 & Danny gets chance for a rest & a nibble 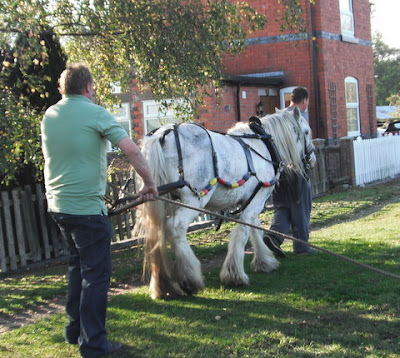 Ready for off again 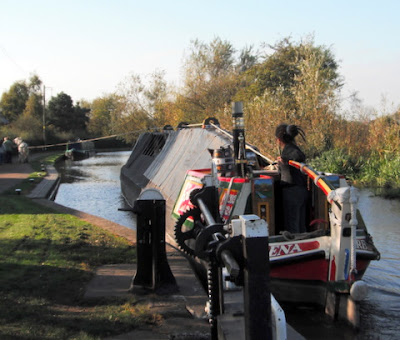 We followed them until we found a mooring spot in Little Stoke, it was 4pm & a longish day for us but Danny still had another mile or so to go,  according to his handlers he was doing really well.
Saturday morning was cold!!  We'd not had a fire on Friday night as it was so mild but the temp plummeted overnight. We moved a mile or so nearer town & then did a trip to Morrison's via Costa Coffee, then fire was lit & has been in ever since. :)


Yesterday was another pleasant autumn day & we had a walk up to Limekiln to see the boats, unfortunately my camera battery was dead so just a couple of pics off my camera which don't do the colours or detail justice
. 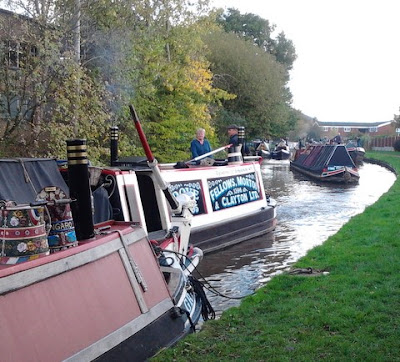 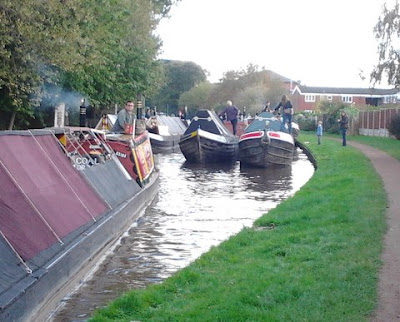 The boats getting ready to move off to do a parade.
A change in the weather today, not much sunshine, a couple of showers & the wind getting up this afternoon. Tomorrow we are expecting a visit from RCR  to do an engine service,  Mark does a service every 250 hours but we feel it's a good idea to let a professional loose in there now & again, we had one done last October & it was really useful - the engineer picked up on a few things we hadn't including an engine mount that had perished due to an ( unseen by us!) small fuel leak dripping on the rubber.
The original plan had been to make for Stoke on Trent by the weekend as I'm catching a coach to Manchester on Saturday but Mark has decided he would rather hang around here than Stoke so we will head out into the country for a couple of days & then return to Stone on Friday, I will then catch a bus to Stoke to make a connection with the coach & then do the reverse on Sunday when I return with Rowen in tow.
Posted by Julia & Mark at Monday, October 17, 2011