Whilst moored in Wigan we did some bits & bobs of shopping which included a sturdy D bolt to make sure the new anchor is securely attached to it's chain & a new 'sitting outside' chair for me. The wood holding the seat in place on one of our director chairs had split & whilst a repair may have been possible, they were never that comfy for sprawling & dozing in so I opted to get a new one,  Mark's quite happy with the remaining director chair & the old one made some good kindling,
As usual when a purchase is imminent I did some research & a few places, Amazon, Argos etc had what looked like comfy chairs with plenty of buyer reviews but I wanted to try for myself before buying, Wigan has a branch of Go Outdoors which is just a 5 minute walk from the canal & I had already picked out a chair on their web site but when I tried it out was not keen so after trying every other chair in the store I ended up with this one which I never would have chosen from how it looked on a web page, so pleased I was able to try before I parted with my cash.
Of course, since I bought it the weather has reverted back to a more seasonable norm, I will have to wait a while before giving it a full road test!


After Wigan our next port of call was Crooke where we spent a peaceful couple of days after the noise of Wigan, Coverit called & hope to do the template for the new cratch cover 'after Easter' .
On Wednesday we moved the short hop to Gathurst & on Wednesday evening we went  to The Baby Elephant for a meal, it was excellent both food & service. We stayed at Gathurst until yesterday, as the station was handy for me to get to Manchester but as soon as I got back yesterday morning we upped pins as the stone canal side slopes & Mark  had had enough of the boat banging against it every time a boat went past plus we needed water.


The water point is on the very short lock landing on the left as you emerge from Dean Lock & if we hadn't really needed water we wouldn't have bothered, it was quite a faff getting in position not helped by gusting winds but we got there in the end & got the tank filled. By the time we got to Appley Lock the gongoozlers were out in force so no shortage of willing hands to push the gates but small children not very well supervised near locks always make me nervous....


We had hoped to moor in Parbold but found the visitor moorings had the same sloping stone side & we could only get to within 18" of the bank, even if we'd used the plank we we'd have been banging again so we carried on a few hundred yards & found a nice spot with no nasty sloping edge & lovely open views. Our plan is to stay put for at least today due to the dire weather forecast ( shouldn't complain really as we do need rain) & probably tomorrow, there is a small convenience store for essentials in the village open today & other small shops that will no doubt be open tomorrow.  We might be sitting out the weather but lots of other boats are on the move, I don't envy them! 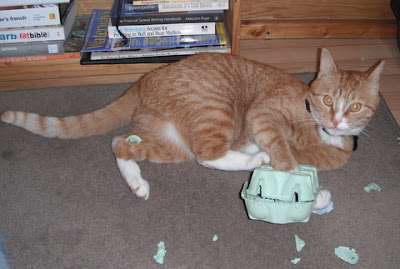 Sid isn't impressed with the rain either,
ripping up a empty egg box helps to relieve the boredom.