We left Parbold on Wednesday morning, arriving at Burscough mid morning. Our  intention was just to stop long enough  do a bit of shopping then move on to find a nice bit of countryside but by the time we got back from Tesco the weather had turned showery & as the moorings were pleasant enough so we decided to stay put. Burscough is a bustling village with plenty of independent shops as well as Tesco & a Co-op, a couple of banks & a Railway Station, a good place to stock up on supplies.
Thursday dawned sunny with a good forecast  so we made the best of it by getting the train to Southport, somewhere we'd never previously visited & what a delightful place it is, after a quick coffee stop we walked the length of the pier, 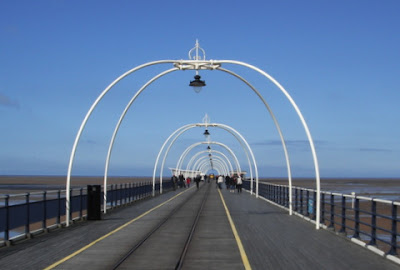 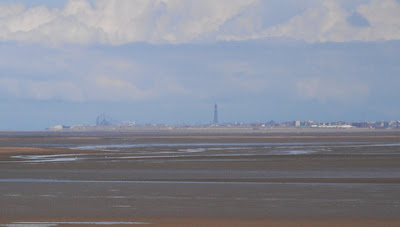 The view from the pier, it's a hazy Blackpool Tower, we could also see the hills of Cumbria but my camera's zoom is not really good enough to take a picture, but in a couple of weeks we will be getting a bit closer to them when we get onto the Lancaster Canal.
We did plenty of walking & 'did'  the pier again before leaving, so as to see the sea as the tide was coming in making the best of our day at the seaside.

Friday saw us moving into the countryside beyond Burscough, we needed to wind ( turn round) at some point so the plan was to head to the winding hole, wind & then moor for the night but the dreaded sloping stone edge  was hampering our efforts & we passed the first winding hole but then we saw a likely spot beyond bridge 28 so up to the next winding hole at bridge 27a, an easy wind despite 2 boats being moored in the winding hole then back to the mooring which was spot on, a nice flat grassy edge. 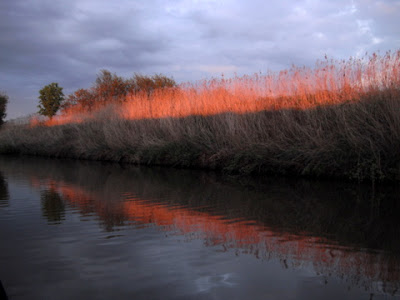 Sunset on the reeds, view from the hatch 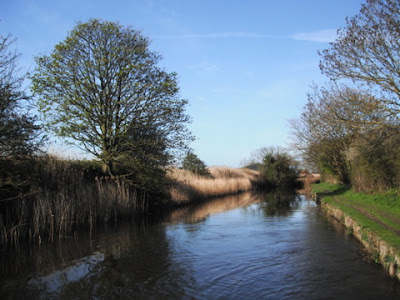 Looking back to our mooring spot as we left yesterday morning.
It was about 9am when we set off after Mark had given the batteries a service, I jumped off at bridge 30, a swing bridge which is permanently open, to walk up to New Lane Swing Bridge which is electrically controlled but there was a problem, the barriers were down & a key was in the lock & refused to budge. A phone call to BW told us that it had already been reported & a couple of BW chaps turned up about 15 mins later so that was okay & off we went to the next bridge, also an electrically controlled one, put my key in the lock & up came the readout " Bridge operation unavailable" great! Another phone call to BW & 25 mins later the same 2 chaps were on the scene to see us through. I do love the Leeds Liverpool Canal but not the bl***y swing  bridges!!
Burscough was next, we filled up with water, emptied loos & rubbish at the smart & clean service point then moved up to the moorings, a quick nip to the shops for a paper & bread & we were off again. I walked ahead to set the lock & check all was clear for Mark to turn onto the Rufford Branch, as I turned the corner the BW van with the 2 chaps from the bridges was parked up so I'm thinking "now what!" but all was fine, they were just doing their rounds.
The locks on the Rufford Arm are brutes with all but one against us & by now the wind had got up with showers threatening but we just got stuck in & pushed on finally moored up just before the last lock at a nice spot with a wide towpath which will be ideal for some wood sawing tomorrow.
In the field opposite are a small flock of sheep, not sure of the breed, Jacobs maybe? Anyway the lambs are very cute. 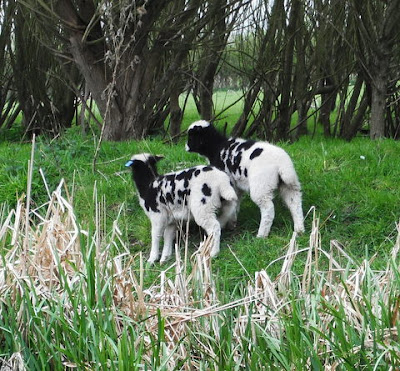 We've had a lazy day today, walked to the small shop/garage for a paper this morning with coffee & cake at Fettlers Marina Cafe on the way back ( slight diversion but worth it!) Then a couple of pints of some real ale in the Hesketh Arms this afternoon with Phil& Gina, some friends from our Bluewater days who are lucky enough to now moor in this lovely spot. We need to be in Tarleton on Wednesday ready for our trip up the Ribble Link on Thursday ( very excited!!) but not sure whether  to move up on Tuesday or Wednesday as the weather forecast for Tuesday isn't too good, just hope it's okay for Thursday!