Arrived at Poppy 11ish on Saturday am after stopping off at asda to pick up supplies - the plan was to fit the fenders, have lunch then take her out of the marina for a trundle towards Keadby. Mark was very keen to play at being captain but a little stressed that he would be reversing her out into a fairly tight space to get her onto the canal & very aware that his 1st attempt was being watched by a few other marina residents.
As it turned out everyone was very supportive ( just detected the odd snigger!) & she was out on the canal without any major trauma - straight into what in the marina was a gentle breeze but out there a stiff cross wind! 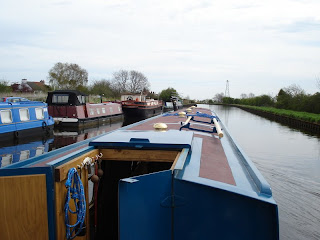 We soon realised just how the wind can affect the boat but before we really had chance to get to grips we came to the lift bridge - the plan was to pull to the side, me jump off to operate said bridge ( Just in case you were in any doubt we are complete novices & this was the maiden voyage in every sense!)
Managed 1st part fine & opening bridge a doddle but the fun started when Mark attempted to get her away from bank - the wind had other ideas & and just blew her back. The bank is metal piled with a steel girder edge which was just the right height for Poppy to get jammed under & remove a layer of paint from the stern. Ouch!!
Need to point out here that my husband is a man who never reads instructions (except as a last resort) & didn't feel it necessary to have any prior knowledge on boat handling preferring to adopt the 'pick it up as you go along' method. So I felt quite justified in a self righteous 'told you so', followed by "you can be an arrogant **** sometimes"
We continued on through next two swing bridges without further mishap but the wind a real problem & then moored up for a much needed coffee. I handed Mark the Boat Owners Handbook(!!) whilst I enjoyed the view across the fields from the side hatch .
We decided that was enough for 1st outing so moved a few hundred yards before winding her in the truest sense as all we had to do was hold the stern rope & the wind did the rest.

On arrival back at the marina Mark was manoevering her around the sharp turn in when one of the residents popped up and talked us through it - phew!
Reversed her into her berth ably assisted by our new neighbours -Thanks guys :-)

Later a neighbour told Mark how on his 1st outing he had removed some paint so felt a bit better but overall perhaps should have appreciated just how windy it was & waited for another day. Hindsight eh! Anyway now I am a lady of leisure I have all the time in the world to spend touching up paint work when (if) we get some decent weather.

So home on Sunday, just a few loose ends to tie up, last bit of packing & last trip to the tip, another visit to the dentist on Tuesday then Wednesday we (& the cats) finally become livaboards........
Posted by Julia & Mark at Monday, April 28, 2008