Another week has flown by, Eric has returned to Manchester - he did seem to enjoy his stay & it's very quiet on the boat now. Thankfully his train journey home was uneventful which is more than can be said for our travel during the previous week!

As I said in last weeks post, our plan to go to Weston Park Museum in Sheffield was scuppered on the 1st attempt by a derailed train in Doncaster Station so on Thursday we tried again - got to just outside Doncaster before coming to a halt (again!) & we were informed that there was a signalling fault just south of Doncaster. After 30 mins or so (which might not seem a long time but the train was quite full with a lot of children aboard & very hot) we moved into the station - we sat tight & eventually were told that the train would be going direct to Sheffield without stopping - which it then did & all in all we arrived in Sheffield only about 45mins later than planned.

The weather was hot & sunny & really Sheffield does itself proud as the 1st thing you see when exiting the station is a water feature consisting of a water fall down a flight of steps, a fountain & this amazing wall of water flowing over a wall of steel. A perfect place to sit & eat a picnic before finding a tram to take us up to the Museum. 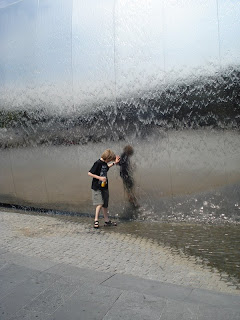 wall of water
Weston Museum is well worth a visit - they have put a lot of effort into organising child friendly interactive activities, just up Erics street. The café wasn’t too bad either!

The Museum is set in Weston Park which is adjacent to the university & being a lovely sunny
graduation day there were lots of proud parents dressed to the nines taking photographs of their graduating offspring in their gowns & mortar boards. 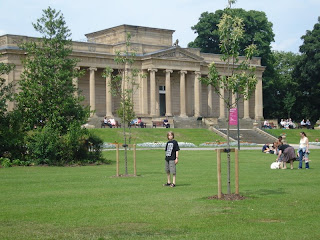 Weston Museum
Onto boaty matters…
When Spike did the service last week he suggested that we have a flexible coupling fitted which according to the blurb -
“Transmits propeller thrust to reduction gear but cushions shock loads from contact with underwater debris or disturbed water. Interrupts shaft transmitted noise and vibration. Allows angular misalignment of propeller shaft.”
Seemed like a good idea after the problems of last week when he found the sheared off coupling bolt - So one was duly ordered & Spike fitted it on Monday.

I spoke to James from The Canvas Man this morning, our cratch cover is due to be fitted next Tuesday. Watch this space for pics of same.

As readers of our blog will know, we had to abort our 2 week cruise to Skipton in June due to a family bereavement, so after much prompting ( nagging!) from yours truly Mark has rebooked some leave - 1st & 2nd week in September. It goes without saying we are looking forward to heading up onto the Leeds & Liverpool. The Yorkshire Dales are amongst my favourite places & it will be very special to get there by (our) narrowboat.

Another thing I have been trying to get sorted are the rails on which the hatch slides. On Poppy they have just been painted which is scraped each time hatch opened or closed, allowing rusty patches to form - which seems like a design fault ( or cost cutting on Liverpool boats part ?) anyway I have been looking around to see how others solve this problem - the boat moored next to us has brass strips fitted to the rails whilst the next boat down has some sort of plastic or Perspex strips, on thinking that the brass looked a good option I had no idea where to get some from so posted a message on Canal World Forum & Gary Peacock at Ledgard Bridge was good enough to reply telling me that they stock them.
All this was several weeks ago so this morning I pulled my finger out & ordered 2 - not really cheap at £35 but worth it if they solve the problem.

Meanwhile on the cat front...

Poppy continues in her efforts to reduce to vole & mouse population - I really wish I could find a way to stop her antics but realistically she is only doing what comes naturally.
When my neighbours see her headed back to the boat from the undergrowth they have taken to shouting to warn us if she has some ‘prey’ enabling me to fending her off before she deposits it on the boat !

Soona couldn’t be more different, she used to be quite standoffish before the move aboard & spent a lot of time up on a shelf in the utility room whereas now she never goes very far from the boat, usually can be found on the sofa, comes to me often for a stroking session & hasn't the slightest interest in catching wildlife - apart from catching the odd fly if it's close enough.
I think she has become more affectionate because being at home all day I am spending more time with her, & whereas Poppy used to play with her occasionally she now ignores Soona completely, just hissing at her should she come too close. ( Poppy having more important stuff to do now she has become a hunter!)

Soona has always had an odd little habit of what I call thumb sucking - she will tap your arm with her paw until she is stroked & after a few mins she sucks the little pad above her paw ( I don’t know its proper name) I attempted to upload a short video but the connection is too slow, shall try again if I get a faster connection. So here's a pic of my lettuce crop instead!