As I have been entertaining grandson Eric for the last few days the blog has taken a bit of a back seat so I’m taking advantage of a bit of a lull in the proceedings whilst Spike gives the engine its 50 hour service & Eric is laid on the bed happily thrashing some monsters on the play station.

To catch up - last Friday was cold & wet so in an attempt to provide a bit of cheer ( & dry the washing ) I lit the stove late afternoon, which of course meant by mid evening we had the doors open until quite late to cool things down !

We usually shut the doors no later than 9pm in an attempt to keep Poppy in otherwise she will stay out until the early hours before meowing to be let in, meaning one of us has to get up, but Soona, who doesn’t usually go abroad of an evening, decided to wander off & was nowhere to be seen come bedtime.
Mark had gone out for one last look before giving it up as a bad job when I heard him say ‘she’s here’ followed by a large splash then a shout of ‘get a towel!’ Mark had spotted her on the gunwale & called her & she tried to do an about turn but fell in. She swam the few yards to the pontoon where Mark was able to pull her in - I didn’t manage to get a pic as she let me give her a good towelling before dashing under the sofa. Next day she seemed fine & none the worse for her ducking. Well at least we know she can swim! 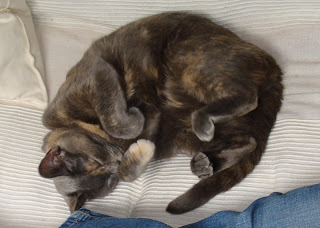 Alot of fuss about nothing
Saturday was fairly uneventful, I popped into Doncaster to meet Eric off the train. He is staying for a week & has been given the title ‘trainee cabin boy’ . His training is going well & he’s quite competent now at making the morning tea. He has also been in charge of the camera this week.

Sunday saw us setting off at 9.30am in cool, overcast & windy conditions accompanied by a couple of light showers. We were headed for Pollington for an overnight stay to give Eric a taste of narrow boating.
Arrived at Stainforth about 11 am so decided to spend an hour or so reading the papers then go to The New Inn ( excellent grub) for lunch. Unfortunately, when we strolled in at 12 we found the ‘Sunday menu’ had no veggie options, back to the boat for beans on toast then & maybe more luck for an evening meal at The Kings Head in Pollington. 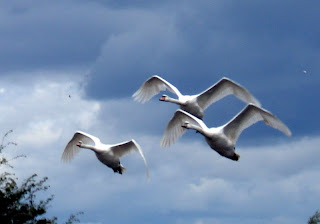 One of Eric’s arty pics 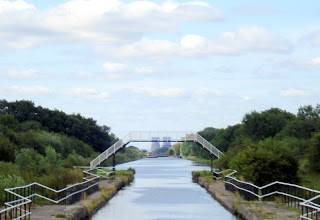 The footbridge on the New Junction just before the Aire & Calder

Once on the Aire & Calder it was into a stiff headwind 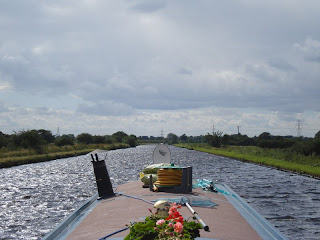 There was plenty of space on the visitor moorings at Pollington but unfortunately someone had a bonfire going in the paddock behind the moorings with thick smoke blowing right through the moorings so we did a quick wind and found a nice spot a couple of hundred yards back down the canal. I telephoned the Kings Head to check if any veggie meals - ‘sorry finished serving food at 3pm’ hmm…
So whilst Mark & Eric let the cats stretch their legs I rustled up a curry. Poppy was in her element & shot off up a nearby tree whilst Soona just poked her nose out for a quick peek. 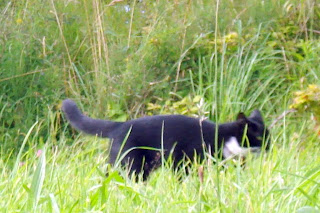 Poppy in hunting mode
Mark was stressing that Poppy would run off/get lost/ be eaten by something big & hairy etc etc as she came down the tree & shot off to explore, but needn’t have worried as an hour or so later she came to the side hatch & let me bring her back in.

Next morning the weather was a bit brighter & less windy for our journey home. We were determined to have at least one meal out so planned to stop off at The New Inn at Stainforth for lunch.
Mooring up outside in bright sunshine the picnic tables looking very inviting, ideal for a sandwich & a half pint of hobgoblin ale. Whilst reading the menu a member of staff came to tell us no food on Mondays as its deep cleaning day for the kitchen. Hmmm. Can you see a pattern here? But she did tell us that the chippie was open round the corner, so chips on the boat then back to the pub to eventually enjoy the hobgoblin! 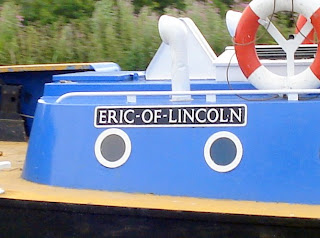 By 3pm we were back on our mooring, Mark quite competent now in his boat handling managed it very smoothly.

Nothing much more to report on the boating front other than whilst I have been typing this Spike has done the service & we are still awaiting a visit from The Canvas Man to complete our cratch.

Eric wanted to visit a museum & yesterday we had planned to go to Weston Park in Sheffield. We caught the 9.38 train from Thorne to Sheffield but didn’t get further than Doncaster due to a derailed freight train in Doncaster Station so we are going to try again tomorrow, last chance before he goes home on Saturday. Shall have to make our own morning tea!
Posted by Julia & Mark at Thursday, July 24, 2008