Spike turned up bright & early with the extension cables for the inverter& by 11am it was all fitted & working. He was just finishing off when he noticed one of the coupling bolts had sheared off & was lying on the floor of the engine bay.
Much humming & hawing followed & after a good poke around Spike found several engine mounting bolts that were loose which had allowed the engine to get slightly misaligned. Bit annoying to say the least - we were aware that the engine needs a service at 50 hours at which point the mountings are all checked but we had only done 40 hours so really should not have happened - anyway Spike managed to sort it, realigned the engine & put a new coupling bolt in.

So at 3pm with a stiff backwind we set off for Keadby, a uneventful journey but it was just nice to be out of the marina & in open water.
The wind didn't pose too much of a problem until we reached the Vazon swing & railway bridges as once through the swing bridge the sliding railway bridge is almost immediately in front of you & its a matter of holding firm until bridge is opened by the operator in the nearby signal box. The wind was attempting to blow us into the bank but luckily we weren't waiting too long before it was slid open & we went through without too much bother. 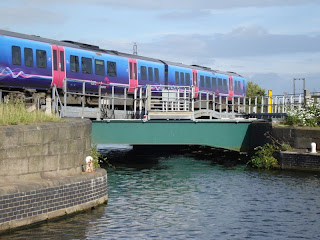 Approaching the Vazon sliding railway bridge, which, according to Nicholson's guide is one of only 3 in europe - the bridge opens by sliding sideways. 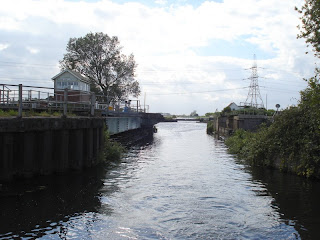 Looking backwards at open bridge, you can just make out the swing bridge in the background.

Poppy enjoying the view as we are cruising along

Once moored up we popped along to the Barge Inn which we had been told by neighbours at Bluewater is under new management & does some good pub grub - unfortunately for us the chef is on holiday but they managed to rustle us up a jacket spud, which was ok & treacle sponge with icecream, which was delicious!
Back to the boat where Mark found the sat signal on 1st attempt ( he is a telly addict!) also good 3g & t mob reception.

Opposite the pub are the long term moorings where the Spider T is berthed - she is featured in this months Towpath Talk. A Humber Super Sloop that was built in 1926 & saved from the cutter’s torch by Mal Nicholson who has transformed her into a designated vessel of National Historic Ships Register. 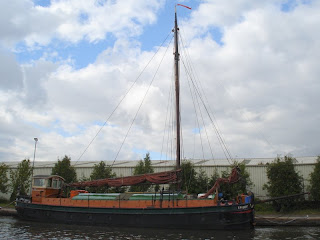 Thursday dawned wet & grey so after a leisurely breakfast we donned our waterproofs & set off back. We took our time, having a couple off stops for coffee & lunch. The rain was not too bad until we were got to Moor's swing bridge when the heavens opened - we decided that being nearly home we'd keep going - so we were like drowned rats by the time we did arrive back.

Possibly because of the rain there was no 'welcoming committee' watching us getting back into our berth which can be a bit stressful but we ( well Mark anyway!) are much more confident in our handling now & she was slotted back in very smoothly.
Then a hot shower to warm us up before a much needed trip to Asda in Doncaster to stock up the food cupboards.
Posted by Julia & Mark at Friday, July 18, 2008