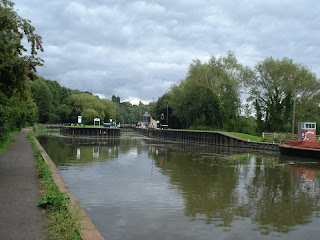 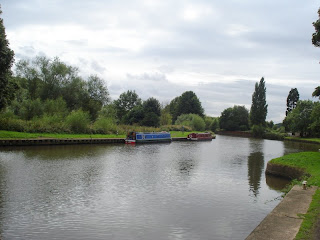 For a bank holiday weekend the marina is very quiet with just a few boats passing us up & down the canal. But the sun is shining & has been most of the day - will it last? Fingers crossed.
We have had a bit of a shuffle round in the marina this week, Poppy's berth was 5th boat along from the corner & in an effort to make manoeuvring easier the pontoon is quite short. The boat next along from us, Therapy, has gone off to pastures new this week - well, Burnley, so we have moved up a berth which has a longer pontoon ( I could just about clean a couple of windows now!) & should be a little easier getting Poppy in & out.

Since moving aboard we have gradually acquired an assortment of bits of wood in readiness for when the colder weather arrives but apart from an ordinary saw (which seemed like far too much work!) had no means of converting them into stove sized logs so I sent Mark off to Argos & for £29.99 he got an electric saw ( bit like a big electric carving knife) & its just the job, so all the wood is now sawn & stacked. Only slight downside was that it's a 2 handed job & my wrist that I sprained a couple of weeks ago didn't like the vibration so with lots of breaks it took longer than it should. 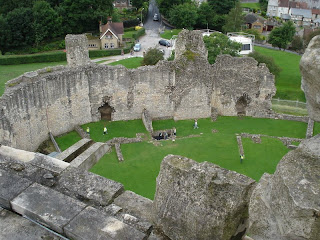 View of castle from top of keep

I have often seen the castle when driving down the motorway but 1st time we'd visited & it was well worth it.
After leaving the castle we took the long way home & drove through some of Dearne Valley.
It looks like there is some good walking to be had so all being well we shall do just that tomorrow.
We also stopped off at Sprotborough & walked down to the lock. The visitor moorings looked nicely situated & we reckon it could be an ideal spot for a weekend stopover.
Note: The pics of Sprotborough are at top of page - for some reason every time I try to move them they just disappear !
I have just tried to finish off with a pic of Rosie the collie but again can't move it to where I want it so it's at the top.
Rosie lives a couple of boats up from us with Phil & Jeannie & she is just gorgeous. She sits & watches Poppy who isn't the least bit bothered by her, Rosie seems quite curious & has scampered after her a couple of times but at a word from Phil she comes back - I feel fairly sure that Rosie wouldn't harm Poppy & just wants to play. No doubt time will tell.........