We have finally got the shower finished, it wasn't that it took long to do the work, in fact the panels that we used ( from B & Q ) were very easy to install so long as care was taken with cutting, it was just fitting it in around Marks days off meant it took a while.
But its done & I think it looks great. I have to say that although I have always quite liked doing tiling, a bit like wallpapering in that it requires a fair amount of concentration & is oddly therapeutic, I would much prefer to use these panels should the need ever arise but hopefully that's it for DIY for a while. 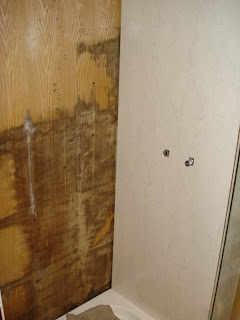 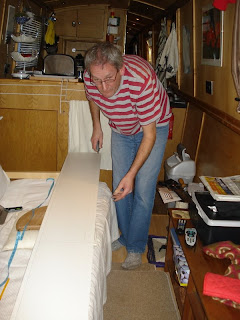 Man at work - yes that is my chopping board under the panel! 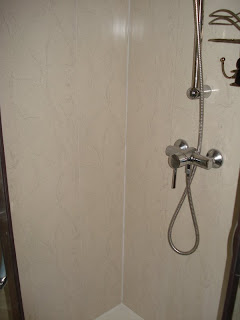 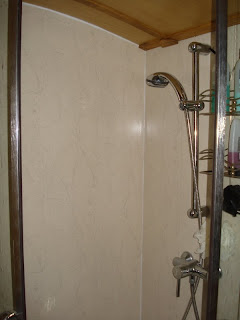 The finished job
One little job that has been added to the maintainance 'to do' list is to cut an inspection hole in the floor - I hadn't been particularly concerned about water in the bilges & still aren't, but one of our neighbours has had a problem that gave them a few nasty moments & required some pumping out.
Ours should be fine, Poppy being a fairly new boat but it will put my mind at rest if I can check now & again. The plan is to make a 6" square hole in the bottom of the wardrobe as that is at the rear & where any water should collect plus it will be out of sight (& reach of cats!)
Posted by Julia & Mark at Monday, January 26, 2009