4 canals in 4 days so we have been busy, having had enough of city life we set off up & out early  (7.30!!) on Thursday morning. The reason for the early start was we were headed for the Peak Forest which meant 9 locks on the Rochdale then the Ashton with another 18 locks and apart from calling into the very handy  canalside Asda for a restock we didn't want to have to moor on the Ashton overnight. 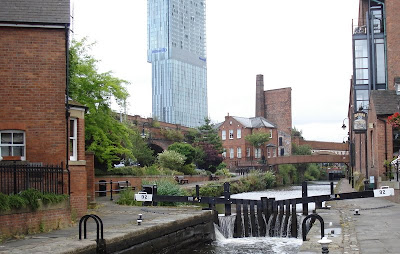 Lock 92, 1st lock out of Castlefield onto the Rochdale with the Hilton in the background

The 1st 9 locks were not easy or pleasant, the lockgear is stiff & heavy to use but the worst thing I found was walking the towpath under the buildings which are smelly & foul, yuk I was pleased to get out!
One thing we really like about the Bridgewater is that even in urban areas it is usually free of rubbish, mainly thanks to the efforts of the Water Womble  the same cannot be said for the Rochdale & Ashton, anyway enough grumbles... things improved somewhat on the Ashton as the locks are narrow & the lock gear easy to use so apart from the wind which livened things up now & again we made steady progress. 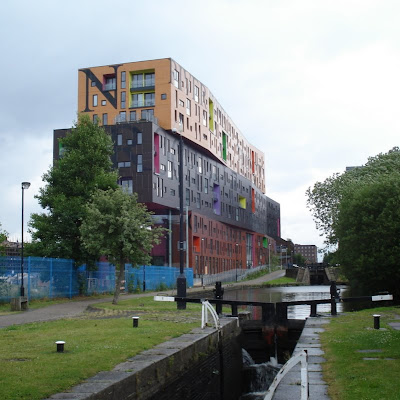 Interesting apartments on the Ashton 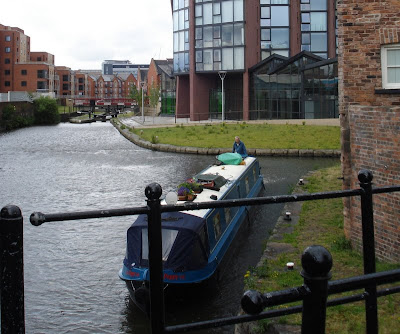 fighting with the wind getting into a lock 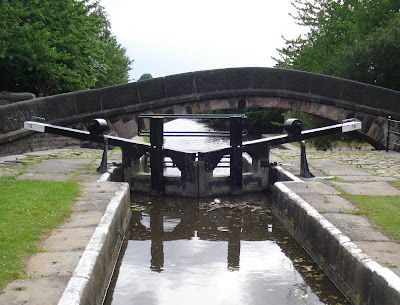 A sight for sore eyes (& arms!) top lock on the Ashton
We finally moored up on the Peak Forest just before the lift bridge at 7.30pm,
12 hours,12 miles & 27 locks & we quite enjoyed it!
On Friday it was just a couple of hours along to Woodley & then we spent the rest of the day relaxing until 9pm when it was apparent that noises from a house behind the hedge heralded 'party night' so we upped pins & had our 1st night time cruise, just for an hour till we found a quiet spot for the night.
Having checked the weather forecast we  thought were in for the odd light shower yesterday and we set off for the Marple flight at 8am with blue skies, within the hour it was pouring down & pretty much continued to do so for most of the day - a very long shower!
As we went up the flight we noticed the pounds were low & and I had to let a couple of lockfuls down to get through 9 & 10, it seemed a cruel joke as we were sodden & the rain was bucketing down.
I took over steering for the last few locks  with Mark standing above on the bridges shouting instructions which wasn't too stressful. I'm getting the hang of it slowly & determined to become proficient so we can take turns at both steering & locking.
Unfortunately I didn't take any pics of the Marple flight due to the rotten weather but it's impressive, very scenic & well worth visiting with or without a boat.
We emerged at the top at 1.15 & stopped off to use the service point, which is just at the top of the Macclesfield then winded & back up to the junction & onto the Upper Peak Forest.
Looking for somewhere to moor up but the towpath is lined with boats for far enough & when we got past the boats it's either too narrow or overgrown to moor up, any spot that is moorable has a boat occupying it, so on we plodded & finally moored up by bridge 33.
Another busy day, 8 miles,16 locks,1 tunnel, 2 lift bridges, 2 swing bridges & a lot of rain...
Today a short hop to Buxworth Basin, it's a lovely spot & we would love to stay for a few days as we've been dashing about & it's time to slow down a tad but it's a strict 48 hrs which is not a bad thing as it means no-ones hogging the best bits. 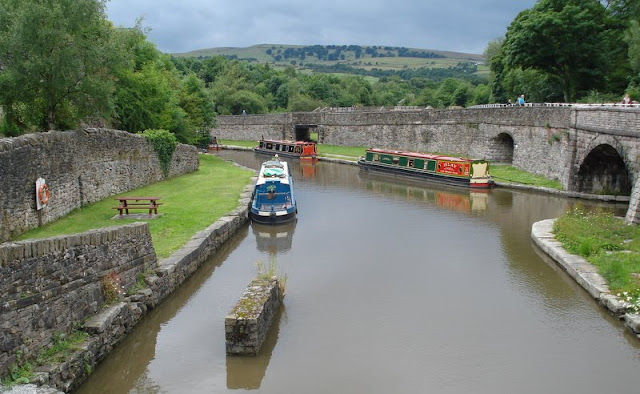 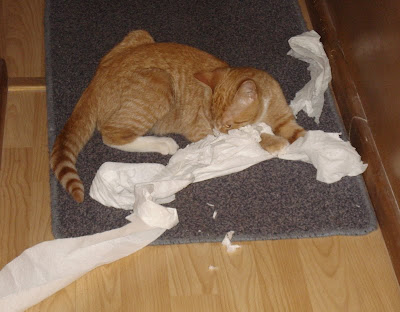 Sid's latest antics, now we have to hide the toilet roll (& the kitchen towel roll)
Posted by Julia & Mark at Sunday, July 18, 2010