As predicted Wednesday was a busy day, we arrived at Johnson's locks at 9.15am so plenty of time to use the services before 10am, the appointed lock 'opening' time as per current restrictions. There were  three boats waiting in front of us but one was only going through the 1st lock to wind then back up so as no other boats appeared we ended up going down on our own. 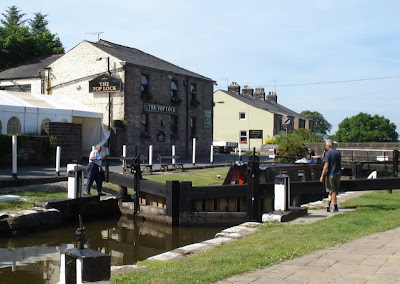 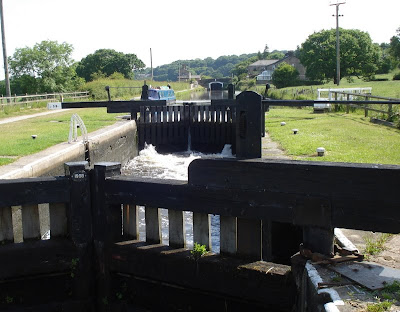 Filling the 2nd lock
It was a beautiful morning with hardly anyone about apart from the odd dog walker so  after Mark had done a couple of locks he gave me the tiller & I did the rest, good job I didn't have too long to think about it! Anyway it went (mostly) fine & as I steered into 1 lock a lady watching commented " you've done that a few times" err no actually..... so apart from getting the steering a bit wrong once & ending up in the bushes not too bad an effort.

Mark doing a lock for a change
We stopped off at Botany Bay to pop in to B&Q & then on to Chorley where we walked into town for food supplies, it was a bit of a slog as by now it was very warm so nice to get back on board & catch a bit of breeze as we cruised to Adlington, our overnight stop. A long, hot day.
Decided to stay put on Thursday, had a lazy day & at 11am not too early a start on Friday but it was a fairly short hop to Wigan & we  ended up mooring a mile or so before the locks whilst still in the countryside.


Saturday, chores & washing, not much else to say about that really!


Today we moved up to the services at the top of the flight as we needed water, when we got here at 9.15am there were several boats waiting for 10am to start their descent. As we pulled onto the water point which is between the top lock & where the 1st boat in the queue was waiting we were quickly asked if we were going down,  err no not today, just getting water... I think they were worried we might be trying to to queue jump.....


After watering up we moored up over on the other side of the locks & eventually  got ourselves organised for a walk down the flight & into town. Not a big shop ( too long a walk back up the hill!) but nice to have a coffee & a bun.
We are having a quiet evening with no TV as Mark can't get a satellite signal, probably as we are surrounded by trees, a chance to do some reading & an early night I think as 21 locks tomorrow - already a few boats moored up so hopefully plenty of hands to make light work ;)
Posted by Julia & Mark at Sunday, July 04, 2010