A later start yesterday at 9.45am & much shorter cruise of just an hour. 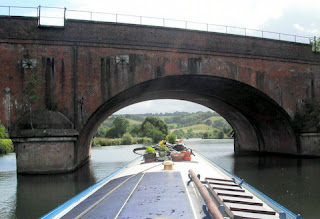 The imposing Gatehampton Railway Bridge built by Brunel, it's looking in need of some TLC. 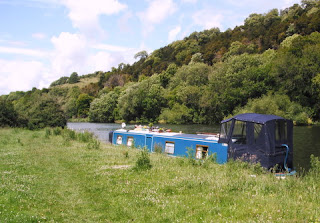 Last nights mooring at Beale Park
Yes we are facing upstream as we'd passed this spot & turned round to moor up, no problem on these wide waters.It was a lovely spot, we saw kingfishers, great crested grebes & plenty of red kites, unfortunately I didn't manage any decent photos.
Sid loved it, dashing about chasing flies & hiding in the long grass, he is getting better off the lead now & doesn't stray far from the boat.
This morning we weren't in a rush to get off, Mark had gone for a run & I was having a bit of tidy up so I let Sid out for a while, when I went out to check on him I spotted a red kite circling just above the mooring  it looked like it was very interested in Sid & was so close I could have had a great photo but of course the camera wasn't handy. Sid was brought indoors fairly swiftly much to his disgust. Not sure whether it would have taken a cat but better safe than sorry.
By the time I'd finished my chores & Mark was back from his run it was raining, it was 12 o'clock when we finally made a move as it seemed to be easing, we left the back cover on, just taking the sides off... 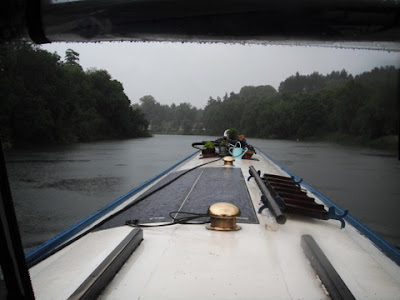 for which we had reason to be thankful as within minutes the heavens well & truly opened! 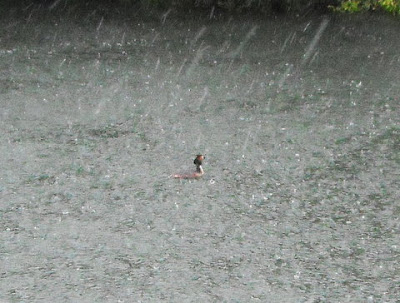 This great crested grebe didn't seem to mind the rain.
Thankfully at Whitchurch lock the lock keeper was on duty, armed with a brolly as the rain was hammering down. We stopped just south of the lock on Pangbourne Meadow moorings  & got a bit wet tying up, half a hour later the sun was out & it's been a lovely afternoon.
Tomorrow we shall head for Reading, hoping to be able to stop at the Tesco moorings to get the weekend shopping & then probably potter along till we see a spot we like & that has a TV signal.
Posted by Julia & Mark at Wednesday, June 22, 2011