We left St Martins on Friday morning, it was cold, grey & damp so a good job it was only an hours cruise to Chirk Bank  before mooring outside The Poachers Pocket pub. Mark figured it was probably  one of the few places before Chirk where we could get a TV signal & we knew from being up here last October that we didn't want to moor anywhere nearer Monks Bridge as a) no TV signal & b) some very noisy insomniac geese.


I was awaiting some mail due to be delivered to Chirk Post Office so we had a walk into the town before lunch, the mail hadn't arrived  but we also needed some supplies so popped into the fairly well stocked Spar. Chirk isn't a big place but has most of the essentials, apart from the Spar there's a chemist, a bank, butchers, bakers, Indian restaurant, coffee shop & some gift type shops so well worth the walk up from the canal.
Yesterday we wanted to check out the mooring situation north of Chirk so we walked over the aqueduct, through the tunnel & through the cutting as far as the marina. 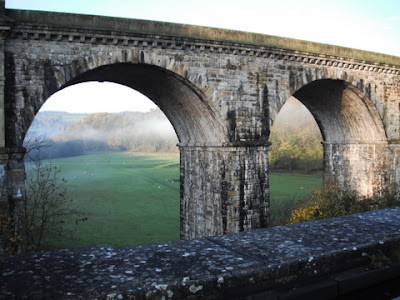 View from the aqueduct across the valley under the railway viaduct,
the mist is just rising off the trees 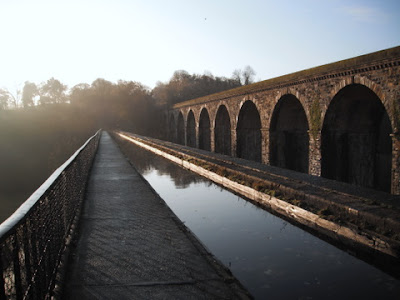 the Chirk Aqueduct is the 'other' aqueduct's poor relation but we like it. 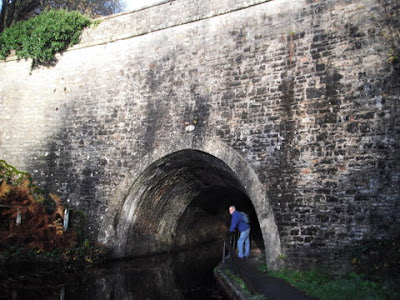 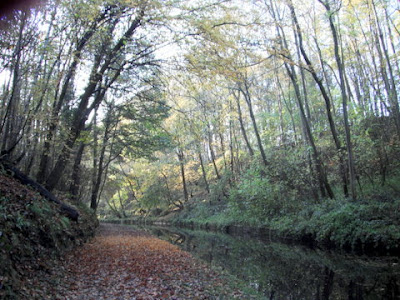 the cutting north of the tunnel
There was just a couple of boats moored near the marina & loads of space for us if we decided to move, the problem with being at The Poachers Pocket was it wasn't really Sid friendly as the road is only across the car park so he wasn't allowed out & was a bit fed up.
After checking the moorings we walked back to Chirk, 1st stop, the Post Office & my mail had arrived so next stop was the chemist to drop off my prescription. It won't be ready until Monday but that's fine then a few bits & bobs from the Spar & back home for lunch.
No evening meal to cook as we decided to try the Poachers Pocket, it's a Marstons  Pub so part of a chain but the food was fine, not Cordon Bleu but we are simple souls so it suited us.
This morning we upped sticks & moved up to the mooring near the marina, Mark has been to fetch the Sunday paper, I've cleaned & tided & Sid has been enjoying being outside.
One odd thing happened earlier, I broke off from the chores to check on Sid, he had got a bit stuck in a tree & I was just watching him when there was a noise from the hedge nearby,  then a hawk struggled out of the hedge with a blackbird in it's claws, it then went back in the hedge. A couple were just walking up with their dog as the hawk flew back out of the hedge, still with the blackbird, which now looked dead, & flew low across the canal disappearing  into the undergrowth on the other side. I didn't have my camera & the other couple, who did have a camera, were like me, too transfixed watching & it all happened so fast. I was surprised that the hawk would go into the hedge to attack the blackbird usually they seem to swoop in the open to get their prey & even after he'd got it he still stayed low, still I'm no ornithologist so what do I know! 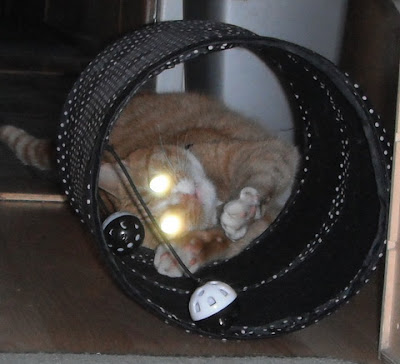 A freaky photo of Sid as the flash catches his eyes playing with the latest toy.
Posted by Julia & Mark at Sunday, November 13, 2011