A definite chill in the air this morning as we moved up through the lock to the water point with more than a touch of frost. 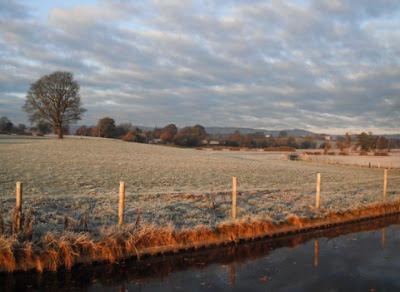 but the early sunshine didn't last & by lunchtime it was thick grey cloud, still bitterly cold though.
Mark had a walk up to Stan's Superstore for some essentials whilst I took advantage of a full water tank & did the washing.


Yesterday we had a walk over to the Co-op at Gobowen for a change, it was a lovely walk down country lanes in glorious autumn sunshine, no pictures though as I did take my camera but forgot that I'd left the battery behind on charge.


We've found the locator tag on Sid working well, I wanted him in before dark tonight as the towpath is a track for cars to the lock cottage, only light traffic but he has a habit of lying on the towpath, Mark had been out & although he got a weak signal couldn't pin point him so a while later I went out. It took me 10 minutes or so but eventually I picked up a signal which took me to some dense undergrowth. The tag on his collar beeps when he is in range & we've noticed that he'll often appear at that point as if he knows the beep means time to come in & sure enough he  soon strolled out of the undergrowth. 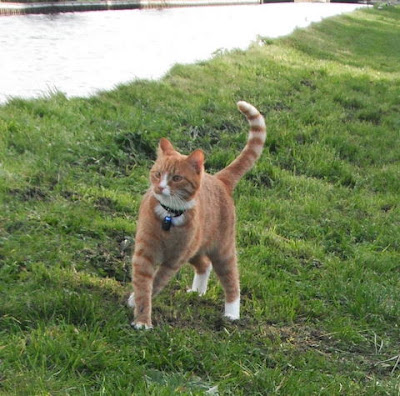 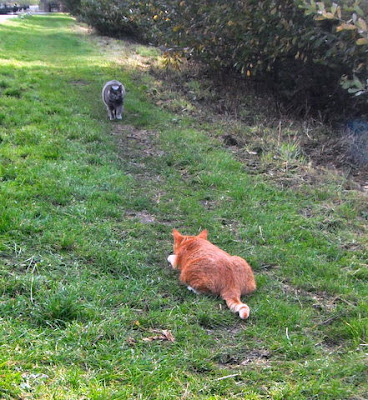 Getting ready to pounce, poor Soona, she rarely appreciates his 'games'
Posted by Julia & Mark at Monday, November 07, 2011