Somewhere on the Llangollen Canal

I took Rowen back to Manchester on Saturday ready for back to school on Monday, the train from Whitchurch was packed & we had to sit in the corridor but it's only an hour's journey so we coped.
The train back on Sunday was as busy though I did manage a seat this time.
Monday morning & we left Whitchurch at 7am arriving in Ellesmere at 12 noon & now half term is over there was plenty of room for us to moor on the arm.
A potter round the town & then a lazy afternoon during which we had a heavy shower or two followed by this rainbow. 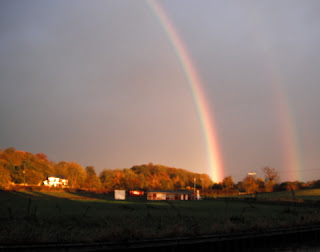 An early trip to Tesco on Tuesday morning to stock up the cupboards, especially heavy stuff like cat litter & tins turned into a bit of a pantomime. We had quite a trolley full & making our way to the tills realised that non of them were staffed & the couple of other customers were using the self service tills. It seems that they don't have anyone available for the tills until 9.30am!!
I hate the self service tills  usually getting the 'unexpected item in bagging area' & then have to wait for assistance anyway. Fortunately a very helpful staff member came & sorted us out.
Once the shopping was aboard we went up to the junction & onto the services for water etc, by the time we'd finished & got underway it was 10.30am, our aim was to get passed bridge 6 as there is a winter stoppage starting on the 7th Nov until 21st Dec & then find a mooring. Which is just what we did & so are currently moored between bridges 7 & 8 , there is a bit of road noise from the A495 but it's good for Sid & a TV signal.
It was warm & sunny so after lunch I took a wire brush to the rubbing strakes before giving the rusty areas some vactan then when it was dry a coat of bitumen, hopefully I will be able to do the other side once on a pontoon in Llangollen Basin ( just one of a list of jobs for this winter)


This morning we walked to the village of Whittington, Mark had spotted a 'premier' shop on Google Earth & whilst we didn't really need anything a copy of the Guardian would be nice. Part of the walk was down the disused railway track which was pleasant & the rest along the main road which was less pleasant. The village is lovely& has a castle which is unusual in that it is run by the local community, but the constant heavy traffic passing through is very intrusive.
We found the shop & the last copy of the paper :) 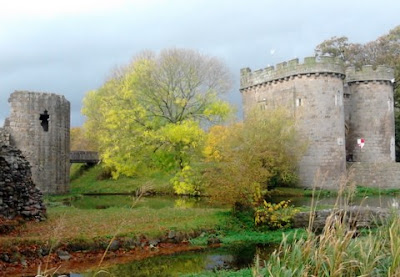 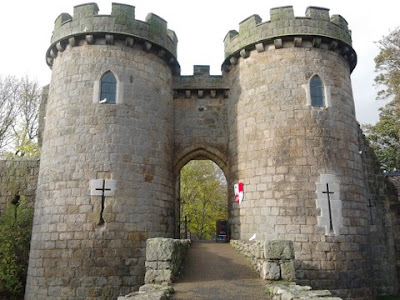 with it's impressive entrance 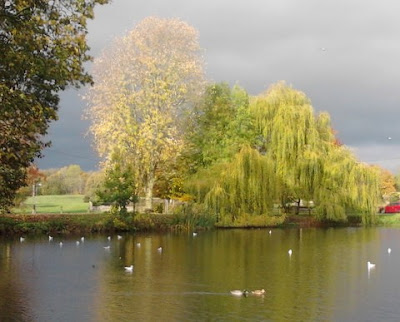 Storm clouds over the village pond 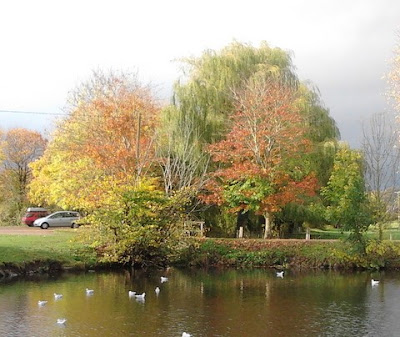 Autumn colour
Although the clouds were gathering the rain held off until we were back home & then the heavens  opened but it didn't last long & the sun is out again.
Now we are past the main stoppages we will be dawdling along as we don't need to be in Llangollen till the end of the month, a bit of forethought will be needed though as there are some short stoppages, Chirk tunnel is closed 15th -17th, Whitehouse tunnel closed 10th - 14th & Pontcysyllte Aqueduct is closed 7th -15th, fingers crossed that these go according to plan & no emergency stoppages result.
Posted by Julia & Mark at Thursday, November 03, 2011