We have been in Llangollen for a few days now on our winter mooring, after a year & a half of cruising continuously it feels odd not to be moving on. I had a bit of a wobble at first as the winter moorings here were described on the British Waterways web site as being in the basin but we found that not to be the case & they are in fact on the towpath, I was a bit put out as we were looking forward to being in the basin, which for those who don't know it, is in a great setting, open with  views all around, whereas the towpath moorings are in the trees ( but much handier for the services!) we also doubted that we'd get a satellite signal for the TV. I was all for demanding our money back & accusing BW of miss selling!  But a chat with Elsie & Eric, nb Bendigedig allayed our fears, so we stopped moaning, settled in & of course it's fine.


Llangollen is a great little town  in a beautiful setting & we intend to do lots of walking so yesterday we made a start by walking up past Valle Crucis Abbey & then continued up the valley  to Eglwyseg Rocks  an imposing limestone escarpment. 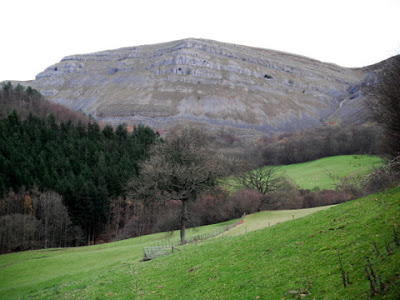 Looking toward Eglwyseg Rocks
We then followed Offa's Dyke path along the base of the rocks, skirted the bottom of the hilltop fort of  Castell Dinas Bran ( we will climb it another day) & then it was an easy downhill stroll back to Llangollen 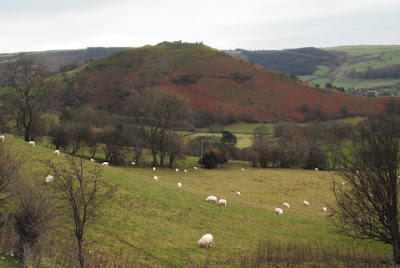 Castel Dinas Bran in the distance 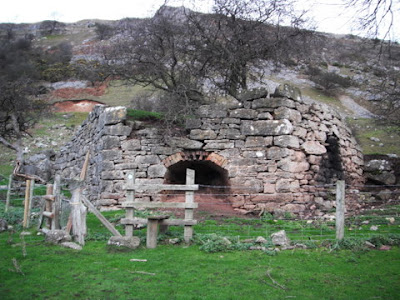 The path passes this Lime Kiln  just below the rocks
One of our concerns about being here rather than in the basin was the fairly busy road at the bottom of the embankment & Sid, but he seems to be wary of the traffic noise & stays clear.  Although this morning he managed to get himself in a bit of a predicament....
When he is out & about he usually pops back now & again but this morning he went off at 7am &  didn't come back. At lunch time I went out with the locator & kept getting a weak signal but couldn't pinpoint his location, I thought he must be in the undergrowth on the embankment so just had to leave him to it.
Mark went out a bit later & before long shouted for me, Sid was sat on the opposite bank meowing loudly, quite plainly distressed & saying "come & get me"!
He must have gone all the way down to the bridge near the trip boats, crossed over & somehow worked his way  back down to the canal but on the wrong side... Mark was contemplating walking round to get him, although as the bank on the other side is steep & quite overgrown wasn't sure how best to tackle it when I pointed out the obvious, so yes, we untied Poppy & took her over to the other bank to rescue him much to the interest of passers by. 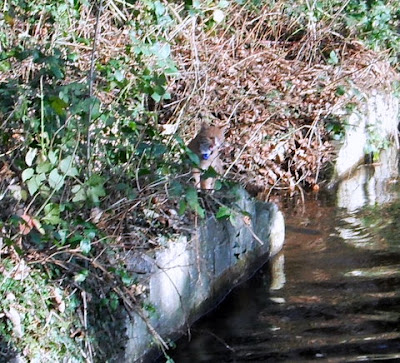 Not the best photo as he is camouflaged in the bracken & it's well cropped
He seemed relieved to be home, had a cuddle ( & he is not usually cuddly at all) a feed & then crashed on the bed. Hopefully he has learnt a lesson but somehow I doubt it...
Posted by Julia & Mark at Saturday, December 03, 2011