3 weeks in & we seem to be adjusting quite well to being stationary, the shore power certainly helps, watching TV whenever we choose & having extra heating from the small oil filled radiator we bought. Plus I can have a reading lamp on when I'm crocheting or reading without a thought for the drain on the batteries.

We usually go to Wrexham once a week to do a Tesco shop & anything else we can't get locally, the bus service is good, running every 15 minutes so never long to wait. Coal is delivered to the towpath on Wednesdays, just need to ring the day before to order, very handy & a good price at  £8.75 for 25kg excel. They will also deliver gas which we will be needing soon. Brilliant service & with a smile.
We have been for a couple of walks, one up to Horseshoe Falls, gosh it was cold that day... 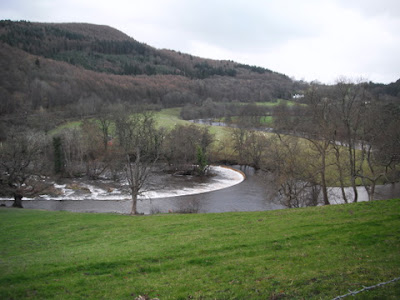 after  crossing the River Dee at Berwyn 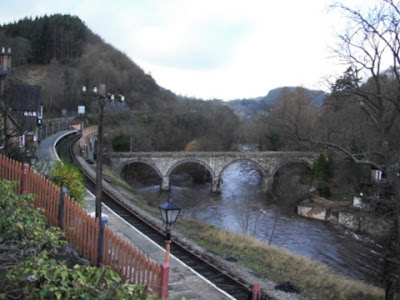 we walked back to Llangollen 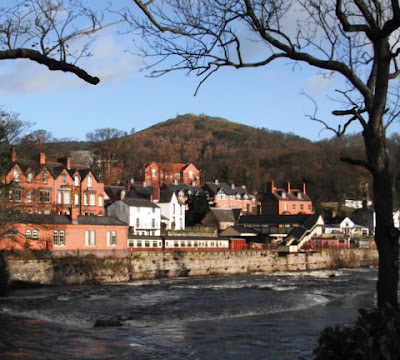 Llangollen, looking across the River Dee towards the Llangollen Railway
Castell Dinas Bran is in the distance
For our next trek we decided to have a walk in the hills we can see from the side hatch, it was a steep climb up & even steeper on the way down, it's been a while since I did any hill walking, hopefully by the time we leave here in spring I will be somewhat fitter! 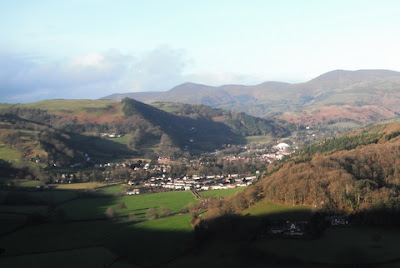 Looking toward Llangollen  & the distant mountains
We haven't done as much walking as we would have liked, in part because the weather has been iffy with gales & rain so after Christmas we shall make more of an effort. It's a shame not to take full advantage of the beautiful countryside plus it's a good way to walk off all the mince pies & Christmas pud...
In the last blog I mentioned Sid's escapade when he ended up on the wrong side of the canal & yes he's been in another scrape but not of his making this time.  A lot of dog walkers make use of the towpath & the majority are responsible owners with the dogs are either on leads or under control but last Tuesday he was chased by 2 out of control dogs, their owner was totally unaware of what was going on as she was strolling along behind a hundred yards or so away.
I ran out when I heard barking, they were chasing Sid & he disappeared down the embankment. I chased them off & some moments later the owner appeared, called the dogs & put them on their leads. I was furious & she got the brunt of it, no apology forthcoming though, at this point I had no idea were Sid was & was worried that he'd been chased across the road but after a few minutes we spotted him in a tree obviously terrified.
Mark managed to get him down, he was very subdued & was reluctant to go out at all for a few days. He is still wary, only going out for short periods, never straying far from the boat & running indoors if he spots anyone with or without a dog. 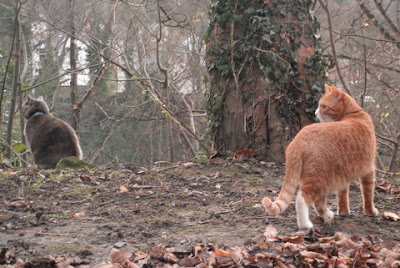 Soona taking the air whilst a wary Sid keeps an eye out for trouble.
I've been getting the Christmas shopping sorted as I'm off visiting tomorrow so I shall be playing Santa. It's Manchester tomorrow & then Scarborough on Sunday for a few days.
Looking forward to some proper fish & chips.
Posted by Julia & Mark at Friday, December 16, 2011